Avalanches: During a brief period of clearing observed numerous fresh loose avalanches on steep terrain at all elevation on north, east, south, and southwest aspects. Also observed a D1.5 Storm Slab on ENE aspect of Schuylkill Ridge, that look to have failed yesterday.

Weather: Mostly cloudy skies with on and off snow showers. New snow accumulations during the day were less than 2 inches. During the afternoon skies began to slightly clear with short periods of sunlight.

Snowpack: Storm total at 10400 feet was right about 20″ with 1.7″SWE. Snow from the previous day was noticeably denser. Ski pen was several inches above the new/old interface. Quick tests on the storm snow showed marginal bonding with old surfaces (crusts and dry snow). Overlying slab remained fairly soft, but on the steepest features was still able to shoot cracks up to 20 feet. At the end of the day sun and warming temps began to moisten the snow surface on all aspects but due north below about 10,000 feet and rapidly settle the snow that was hit by direct sun. 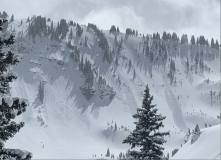