While descending a ridge above a steep convexity in Red Lady Glades, either our group or a prior group remotely triggered a D1 storm slab avalanche. The slide occurred on an ESE facing aspect below treeline. The crown was about 8-10″ and failed on the new snow/ old snow interface.
(SS-ASr-R1-D1-I).

Weather: Sky conditions varied from scattered to broken throughout our tour. Occasional periods of very light snowfall (S-1). As we gained the ridge near treeline, the wind blew at a moderate speed out of the W/NW, with the intermittent strong gust.

Snowpack: About 8-10″ of new snow from last night. Noticeable loading on easterly facing slopes. The snow on SE/S facing slopes stayed dry above 10,200′ and the skiing was great. Below 10,200′, a thin zipper crust developed on the surface due to the sunshine this morning. 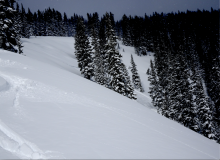 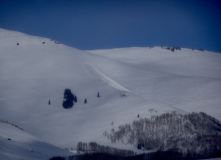