We skier triggered 4 Storm Snow avalanches, one of which was remotely triggered and was likely a D2 in size. Poor visibility and trees prevented viewing the debris.
A group riding earlier the morning in same terrain triggered a D1.5 as well.
We also saw two natural avalanches, D1.
All observed avalanches failed at the new/old interface and where easterly to northeasterly facing.

Spoke with a group of skiers, that ascended a ridge just adjacent to our up track, that said Purple Palace terrain had avalanched in multiple places. I did not view this terrain, but based on the slope size in this area these avalanches were likely close to D2 in size.

Skies were overcast with light snow from 10am to 3pm, generally S1 snow with brief periods of S2. On our below tree line tour, winds were light with occasional moderate gusts. Visibility was poor but did see small amounts of snow transport.
Snowpack:

On our tour we found new snow totals ranging from 10″ to 15″. The new snow was resting on very weak old snow on any aspects with even the slightest bit of north to it. The new snow was very reactive to the weight of a person. We triggered 4 slides, saw one other human triggered slide, and two natural slides. Mostly D1.5 in size, given the generally small terrain features we were on. I imagine that on larger slopes avalanches would have reached D2 in size (large enough to bury a person). Several of the avalanches were triggered remotely from 75′ to 100′ away; impressive for storm snow that was fist dense(very soft). We descended east facing terrain back to snowmo’s and saw cracking within the new snow on descent that wasn’t present while ascending. The storm snow was sitting on melt/freeze crusts  and large facets on this east aspect.

At the end of the day, we rode machines part way up Paradise Divide road until we were shut down by soft, large drifts up to 4′ thick on the road surface. On our tour we saw minimal evidence of loading below tree line, but riding up the road through the open the impact of the wind was obvious. 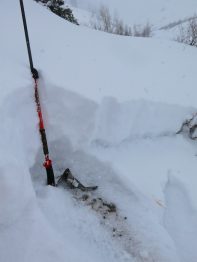 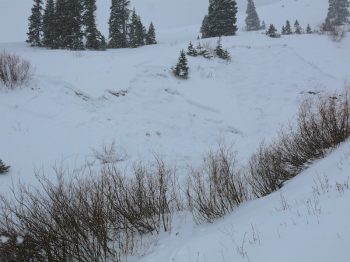 This small and very soft slab avalanche was human triggered in two parts, by walking above the terrain. NE aspect at 9,800ft. 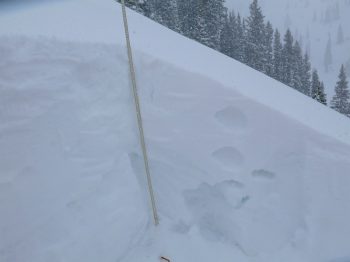 Same northeasterly aspect as the small avalanche before. As you can see HS increased considerably, while the slab is still very soft, it is much larger. NE aspect at about 10,400ft 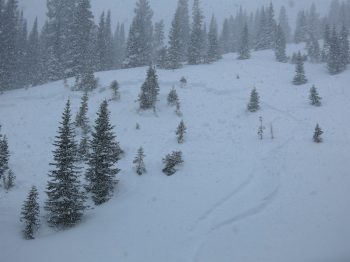 The flank of a human triggered avalanche on an easterly aspect at about 10,800ft. D1.5 given the small terrain. 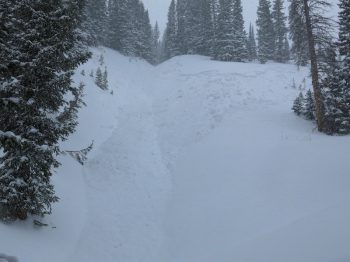 The previous human triggered avalanche extended across the slope and into this gully. 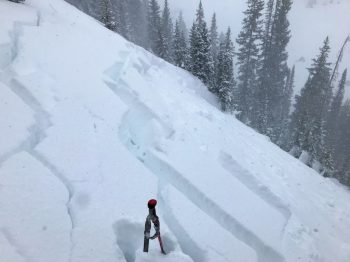 We triggered this large D2 avalanche while walking across the top of the slope. Never did see the far flank or the debris below. NE aspect at about 10,800ft