Avalanches: Skier triggered two very small Wind Slabs on very open south-facing slopes behind ribs. R1D1
Observed a D1.5 Wind Slab in East Bowl in Anthracites – crown already filled in completely by 4pm.
Observed two fresh avalanches on drifted southeast-facing near treeline features in Elk Basin and Evans Basin on Emmons massif. Only got a brief view a long way off but looked D1.5ish.
Weather: Mostly cloudy skies with a low ceiling obscuring alpine terrain much of the day. Winds increased in speed out of the northwest through the afternoon. Observed snow transport onto east through south-facing slopes at near treeline elevation band. Snowfall was often light with a short period in the early afternoon that was around S1/S2. Accumulations from 930 to 4pm around 2 inches.

Snowpack: Storm totals reached ~9inches at 11,000 feet at 330pm. Snow was fairly dense. East through south-facing terrain up to 11500′ had soft crust underneath the most recent snow. Found soft drifts up to 14 inches on leeward southeast slopes. A brief period of sun midday put a soft crust on east and south slopes. Experienced some minor cracking on drifted features, but no signs of instability on northerly terrain. Sloughing was minimal on north slopes. Wind texture and stiffening were present on most open slopes. 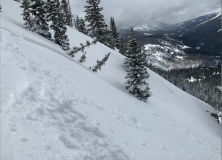