Avalanches: Visibility was obscured and/or teasing all day with tough definition out Slate River Corridor. Smallish debris piles beneath Climax observed but could not confirm if Loose Dry avalanches or Storm Slabs. Lots of small Dry Loose avalanches observed near valley bottoms on steep shaded terrain. Observed two Storm Slabs on up-valley end of Schuylkill Ridge, D1’s. These looked to be half-filled in when observed in the PM.

On a drive up to Snodgrass TH in the evening just before sunset I was able to spy a few more significant slab avalanches above the Gothic Corridor. A real smorgasbord of avalanches…mostly dry loose, one obvious Wind Slab, Storm Slabs, and a Persistent Slab triggered by a shallow Storm Slab. Nearly all avalanche were D1-1.5 with only two slides reaching D2 in size.

Weather: Mostly cloudy skies from 1030am to 430pm out Slate River. Light snowfall was continuous throughout the day. At 130pm measured 19″ of new snow with 1.3″SWE (10500′). Winds were light at valley bottoms, but you could hear stronger winds at ridge tops.  Storm snow was noticeably settling during the day.  1.5″ snow accumulated between 11am and 4pm.

At sunset with better visibility, I could see active transport on to SE aspects on Red Ridge above Gothic. Alpine terrain in this area looked to have experienced a good amount of snow transport during the storm.

Snowpack: There was a clear density change in the bottom half of the new snow that was presumably responsible for the Storm Slab avalanches observed. It was easy to find this layer with simple hand shear tests, but even on steeper rolls around 35ish degrees, there was almost no cracking in the storm snow. Cracks never shot more than 2 or 3 feet.

Superficially touched a few SE below treeline slopes and found the new snow resting on a 3cm melt/freeze crust from this past weekend’s warm and sunny weather. Bonding between the new and old snow appeared to be good on these slick surfaces at this location. 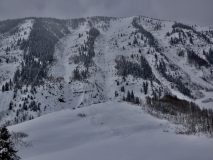 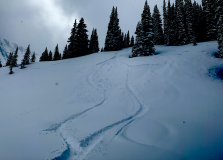 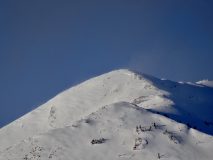 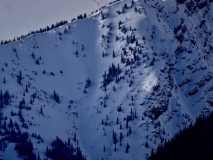 A combination of Loose Dry and Storm Slab avalanches with an obvious animal track going into crown, 3/2 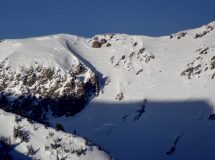