Nothing new, but got a photo of a slide that was reported from the east side of Cinnamon last Thursday, This slide likely failed, 12/13 from heavy winds transporting the few inches of fresh snow that fell last Wednesday night, 12/12. This slide propagated across the entire eastern side of the summit terrain feature of Cinnamon.

Weather: Partly cloudy skies turning to mostly cloudy skies by about noon. Light snow started to fall around 2pm, but not hard enough to produce accumulations. Winds were out of the west and picked up with light gusting up to 15mph during the afternoon.

Snowpack: Poked around in two alpine bowls on S and SW aspects.

First, the SW bowl was generally blown off with exposed rocks transitioning to 25 to 40 of weak faceted snow with no Persistent Slab structure Present-some of this area was capped with a soft, weak crust.  This shallow or rocky condition covered 3/5ths of the bowl. As we traversed further into the bowl, north winds from the past week were able to drift snow on to a portion of the bowl because of the western ridge that defines that bowl. This ridge created a drifted seam of snow that ran down the length of the bowl. This seam of snow was a stack of dense wind slabs (1F+ and P- hard) around 100cm deep. Did not observe PSa structure present even in this drifted area but did not dig in the deepest area immediately behind the ridge feature. However, at the surface in this drifted area was a thin,3 to 10cm, wind/suncrust and immediately below was a thin layer of faceted snow. This structure does not currently present much hazard but with future loading could produce a Persistent Slab set up.

On the south bowl, we again found large areas of reduced HS from wind stripping. Probing across and down much of the slope and one quick pit did not showed Persistent Slab structure. Snow surface here was a suncrust around 3cm thick that was supportive to skis on steep slopes. This surface crust was resting on several centimeters of weak faceted snow below. This structure does not present a current hazard but if loaded with a substantial slab in the future it certainly would. 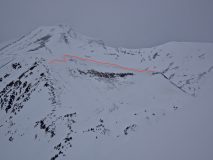 E side Cinnamon. Slide reported 12/13 but heres a picture of its wide propagation