Avalanches: Carnage from last weekend. Nothing drastically new.
Weather: Clear sky becoming mostly cloudy in the afternoon. Winds looked to be picking up at higher elevations with some gusts down low. As winds picked up I didn’t see any snow blowing around.
Snowpack: Afternoon ski and look about. Few obvious sings to instability despite some poor snowpack structure. If an avalanche offered you candy would you take it?

Took a ski off to measure boot pen on an ENE slope at about 10,300ft. Stepping into the snowpack produced a sonic boom that had me cowering like a cat. Classic, no obvious sings to instability, then boom… Cracks shot for hundreds of feet and linked hillsides via changes in aspects or through meadows. Oddly enough the cracks didn’t appear on some more ESE facing slopes, but the collapse had linked through them and appeared on other more ENE facing slopes further away. More snowpack structure info in pics. Boot pen to the ground.

Despite some talk of surface hoar, didn’t really observe any slope scale surface hoar. Even on more shaded and northerly terrain features. Small NSF on northeasterly slopes, with moist snow surfaces on SE facing slopes. On slopes under 35 degrees facing ESE or SE that moist snow looked like it would form a 2-3cm crust as it refreezes. 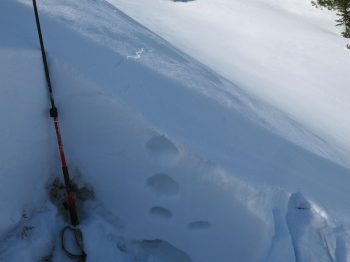 ENE Aspect at 10,400ft. F to 4F snow over 2-3mm facts below the Thanksgiving interface. Got a very large collapse after taking a ski off a few hundred feet away on a different slope that was joined by more ESE or SE facing slopes where the cracks disappeared. 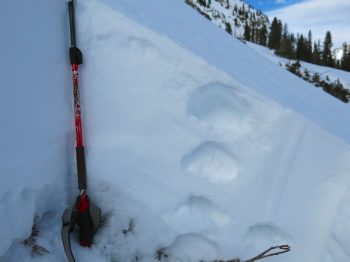 ESE aspect, about 34 degrees at 10,800ft. A 5-8cm crust was mostly resting on the group at this elevation. 1-2mm facets were on top of the crust as the thanksgiving interface, with last weekends 4F to F snow sitting on top. 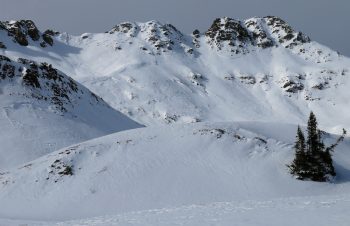 Just another large natural avalanche from last weekends storm that I hadn’t seen yet. Easterly facing terrain around 12,000ft