Avalanches:  Lots of old sluffs that ran several days ago with a few inches of new on top of debris. A handful of windslabs on drifted terrain features E,S,SW. Did not observe any deep or basal weak layer avalanches.

Snowpack: Below treeline, in this snow favored area, I was checking on the recent Santa storm to see if it had settled or slabbed up much….it has not. Storm snow since 12/24 was in the 30 to 40cm range throughout Washington Gulch. Immediately beneath the Santa storm is a thin layer of 1mm near surface facets that formed from the dry spell in the middle of December. This layer is obvious in pit walls and produced results in hand sheer and CT’s but because it remains so soft – no propagating test results from profile site. Cold temperatures will likely prevent the Santa storm from becoming cohesive in the short term at sheltered locations; if you could find a location that saw a bit of drifting maybe there could be more cohesion and increased slab avalanche hazard. See photo of profile. 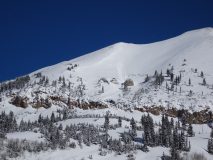 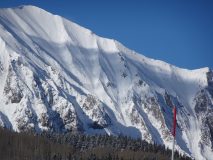