D1 – suspected skier triggered slide we were checking out that failed on buried surface hoar from 12/19.
At valley bottom could see two other shallow slabs that also likely failed on same 12/19 SH layer.

Weather: Could feel the inversion with colder temps down low and warmer temps at top. Building clouds throughout the day.
Snowpack: At top near 11,000′ in dark timber the snowpack was still holding on to a 1finger slab in midpack with weak surfaces that sloughed on steep pitches. HS maxed out around 100cm. Locations near ridge top that avalanches early in the year had no slab and were just plain weak.

At 10,600′ we checked out a suspected skier triggered slide (slide observed 12/27). Midpack was only 4finger hard here 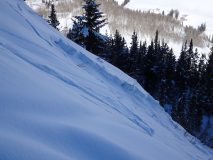 side view of skier triggered slide first observed on 12/19 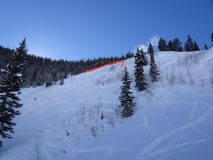 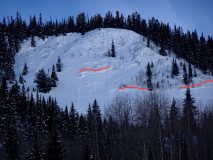 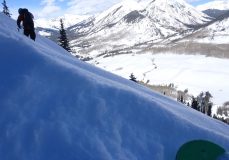 fresh surface hoar that will likely be buried tonight 12/30

. Slide involved only the Christmas Eve storm and failed on the buried surface hoar from 12/19. Crown was only about 8 inches thick and very soft and weak. When we descended immediately adjacent to the crown we were able to trigger small facet sloughs easily. Fresh surface hoar was present that will certainly be buried with the incoming storm.

Snowpack in general was very weak with facet sloughs being the greatest concern. Weak snow surfaces here will produce avalanches with only modest loading.