Weather: Mostly cloudy skies with snowfall rates between s-1 and s2. Several short periods of moderate snow. Accumulations as of 3pm around 4 inches.

Snowpack: Traveled above numerous northerly terrain features, many of which avalanched in December, without collapsing or signs of instability. Descended northerly slopes up to about 35 with no signs of instability. Traveled through some lower angled slopes that looked to have seen little traffic yet this winter without collapsing. One hasty pit showed a snowpack largely composed of fist hard snow around 90cm deep…just enough support for reasonable riding conditions. Other lower angled northerly features felt a bit stiffer while probing as compared to pit location. It is becoming hard to visually tell which slopes have avalanched in December and those that didn’t. We choose to avoid the steepest terrain and avoid features that had consequential runouts to hedge our bets. 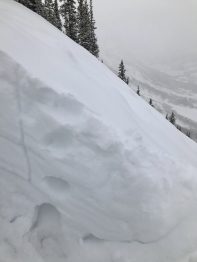 No need for a shovel here, just wipe the snow away with your hand and make a wall. Simple snowpack structure. Soft faceting slab over weak facets. ENE Aspect, 10,600ft, HS ~90cm, Slope ~34