Location: Near First Bowl on Snodgrass

A skier and splitboarder skinned up the southern side of Snodgrass Mountain. They descended the north side, near an area called First Bowl. At around 10,000’, the splitboarder triggered and was caught in a persistent slab avalanche. The avalanche carried the boarder into a tree, injuring his leg. The party was able to call 911 and was assisted out of the field by organized rescuers.

The avalanche occurred on a below treeline slope at 10,000 feet on a northeast aspect. The avalanche was a soft slab that released on old, faceted snow layers. The slab was relatively small in size (R2D1.5).

We will publish a complete accident report in the future. 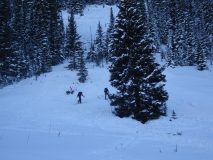 Site of the accident 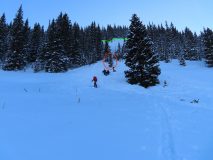 The tree where the snowboarder was injured is circled in red. 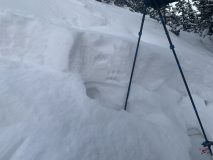 A flank of the avalanche 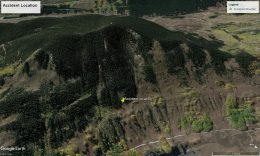 Location of the accident 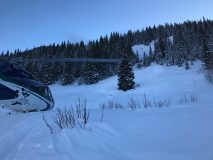 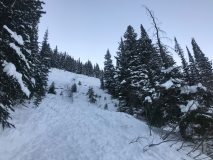