Avalanches: no recent avalanches observed
Weather: Clear skies in the morning, with gusty southeasterly winds, gave way to cloudy skies just before noon. Wind reduced significantly once the snowfall began. Intermittent light snowfall from noon until 4 then an increase in snowfall rate of S1 to S2 from 4 to 530. Total new snow as of 530 was 1.5″ at 9,500′.
Snowpack: Targeted some north and easterly slopes looking at surfaces that the incoming storm will fall on. On east slopes below treeline a double crust with facets between was observed like in other parts of the range. This double crust setup will likely help spread failures further across a slope once loaded by incoming/current storm (see photo).
Moving onto northeast-facing slopes with depths around 130cm we tested deeper weak layers in the snowpack, 12/10 and 1/19, with ECTX results and 45/110 END, 35/100 END PST scores respectively. Near the surface on shaded slopes, about 15 – 20cm down, is a layer of 1mm facets that looks to be a likely failure plane for the incoming storm (see photo). This layer popped cleanly in shovel tilt tests with moderate force. I expect if/when avalanches occur during this loading event on shaded slopes below treeline that this is where avalanches will break first.
Lastly, we traveled through an avalanche path that ran on the basal Depth Hoar layer in February and found around 20 – 40cm of refill. Resting immediately above the slick bed surface was a layer of well-developed facets (see photo). I anticipate many shaded below treeline paths that avalanched in February will not require a significant load before failing again. 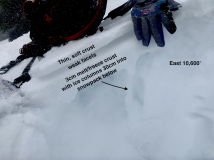 Double crust with facets between that will likely help failures run further with the current loading event. 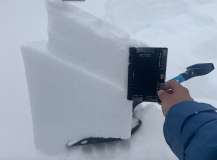 Shovel Tilt Test with result about 15cm down on 1mm facets. A likely place for avalanches, on shaded slopes, to break during the loading event. 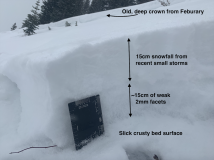 A look at an avalanche path that failed deeply in February. A slick crust at the ground has weak facets immediately above. Slopes like this will not tolerate much loading before failing again.