Avalanches: On a NE aspect NTL, we skier triggered a small soft slab, ~8″ thick, that ran about 1,000 feet and was D1.5 in size as it entrained a fair amount of snow. SS-AS-R1-D1.5-I. No other avalanches observed, but alpine views were obscured by clouds.
Weather: COLD. Calm to light westerly winds where we were with no snow transport, but I could see plumes of blowing snow off high peaks from the northwest. Periods of S-1, and broken skies.
Snowpack: See profiles. 5″ of new snow below treeline, drifts up to 8-10″ near treeline. Not much wind effect in this area. Below treeline lacks slab cohesion for avalanche concerns; some minor cracking in the new snow but no other signs of instability or propagating test results. Small grained facet layers could be problematic with future storms. Same for southeast aspects near treeline. Some minor cracking in the new snow, but no load right now on a concerning facet/crust layer. On a due north, near treeline slope ~11,300 ft, we found the unnerving 11/18 interface (3-4 mm, fist hard depth hoar) below a 75 cm cohesive slab. This layer appeared to be discontinuous due to patchy coverage and/or ground surface roughness. Non propagating ECT results but sudden collapse CT results. No signs of instability while jumping hard above the slope of concern, but we chose to avoid that slope and steer towards a NE pitch that didn’t hold the depth hoar layer. 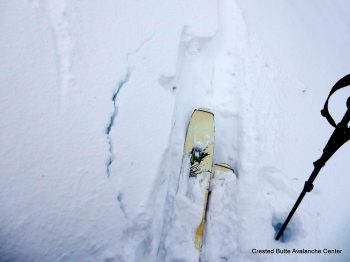 Minor cracking under foot at the new snow interface, both on shaded aspects (on NSF) and sunny aspects (MFcr) 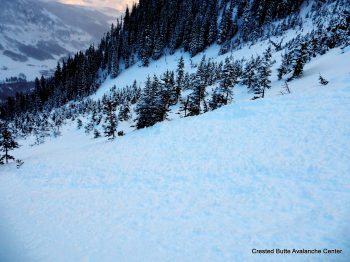