Avalanches: Encountered soft slab and loose snow avalanches in the new storm snow at all elevation bands today on specific terrain features, all running on the storm interface about 8-10″ deep. All small in size (D1 to D1.5), but some could have knocked you over or dragged you into trees. See photos.
2x SS-N-R1-D1-I in Redwell Basin, N aspect ATL
1x SS-N-R1-D1-I low in Schuykill Ridge, NE aspect BTL
~10x L-N/ASc-R1-D1/1.5-I all elevations of Redwell Basin and Schuykill Ridge. N to NE aspects. Some of these were moist to wet near valley bottom.
Weather: Spring-like unsettled day, with mild temps, broken to overcast skies with a few periods of greenhouse warming and a few intense bursts of snow (S2). 1″ to 2″ of total accumulation. Light SW ridgetop winds, with signs of previous light transport but none observed on tour.
Snowpack: 15 cm of storm snow at valley bottom, 22 cm in a wind sheltered ridgetop location. Drifts up to 30 cm on NE aspect NTL.
SE aspects NTL held ~ 60-70cm of mostly pencil to knife refrozen wet grains below the storm snow. Storm snow appeared to be decently bonded to this crust, with no signs of instability while ski cutting and traversing steep slopes.
NE aspects below ~10,000 ft beginning to transition towards spring, with partially refreezing wet to moist grains into much of the snowpack, and a supportive crust below the storm snow. Below this elevation, the new snow was especially dense and became moist on all aspects due to greenhousing. We triggered a few small loose snow avalanches running on the crust on steep, NE aspects BTL.
Higher in elevation NTL, the same NE aspect was entirely dry, with a soft (4F-), thin (2cm), dusty melt-freeze crust and 1.5-2mm, F facets above and below the dusty crust. Got one shooting crack ~20 feet long in a lightly windloaded feature, failing on the facets above the crust, and a few other minor cracks on the same layer.
Due north above 10,000 ft (N/BTL) held near-surface facets with no crust below the storm snow; easy to trigger sluffs on steep slopes. 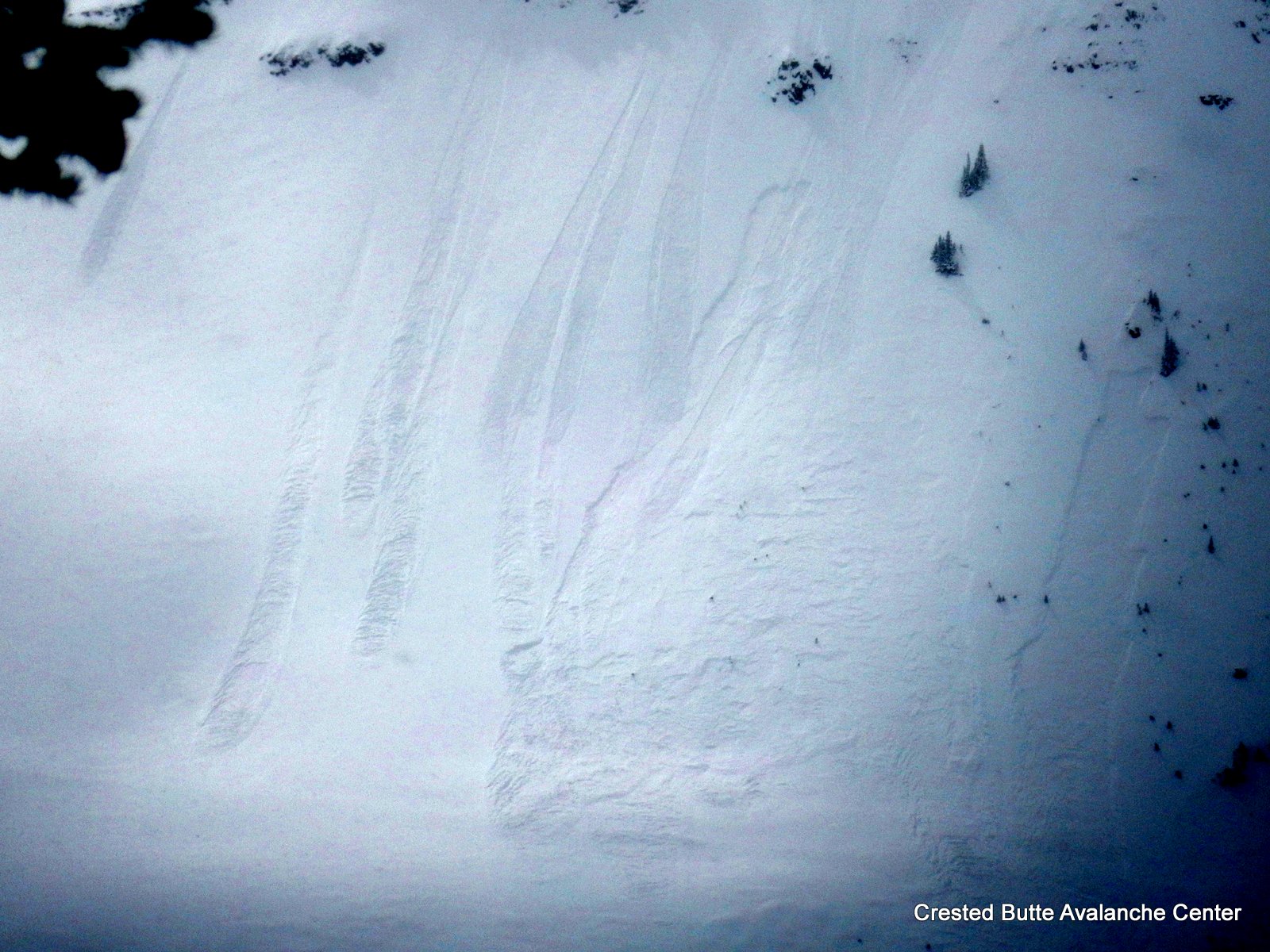 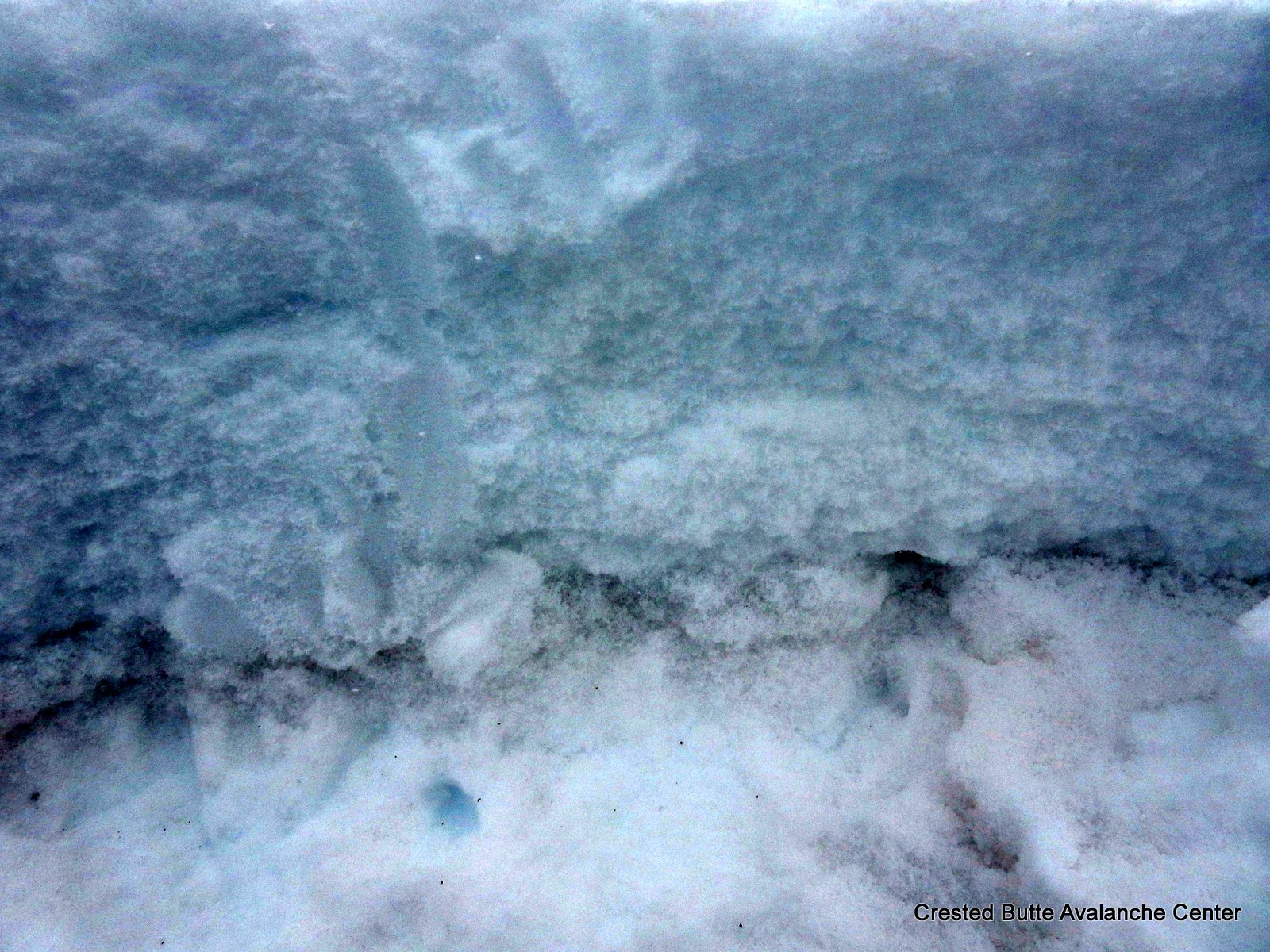 NE aspect NTL. Dusty, friable crust layer with 1.5-2mm facets above and below. Got a shooting crack above this crust 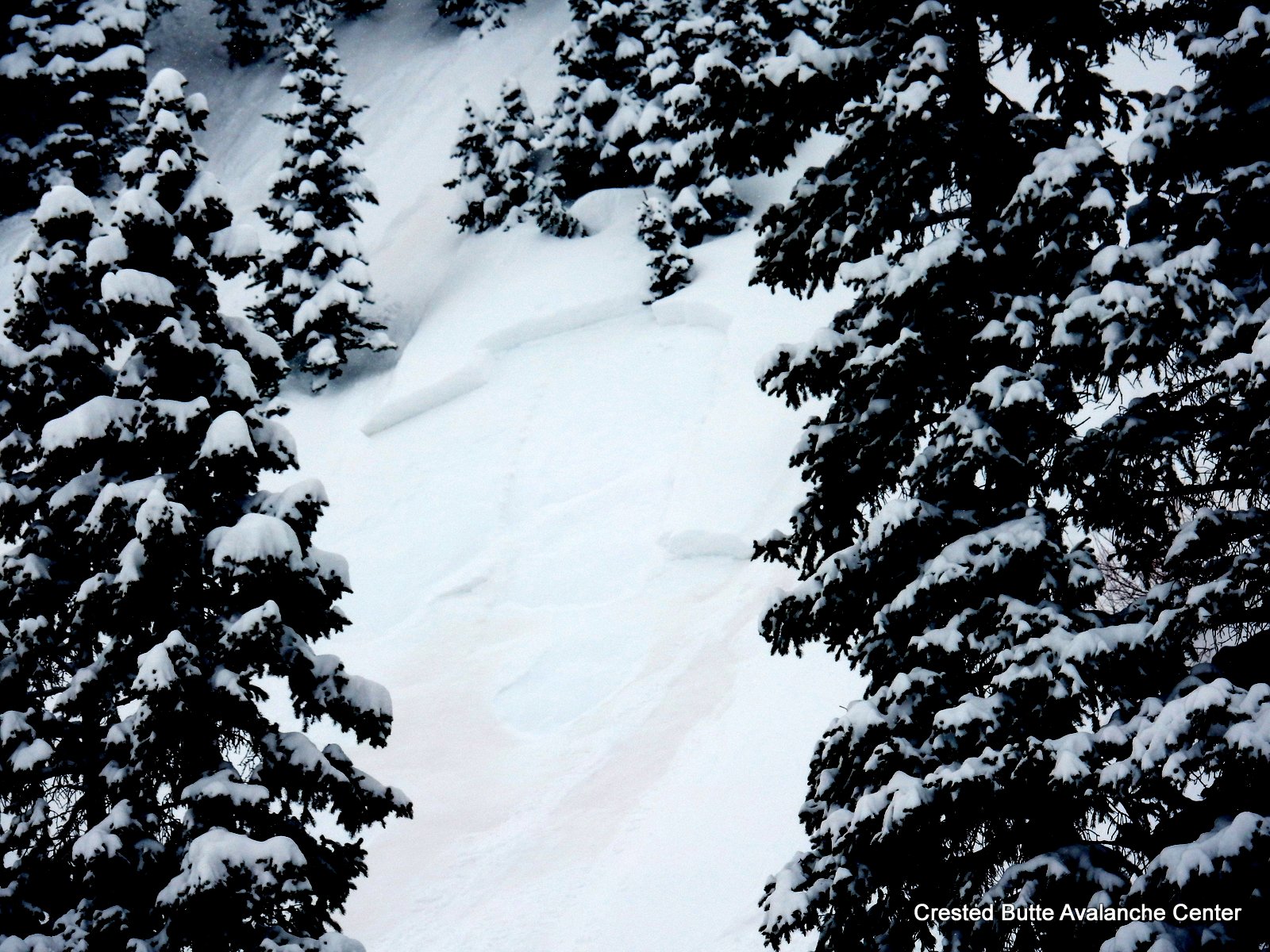 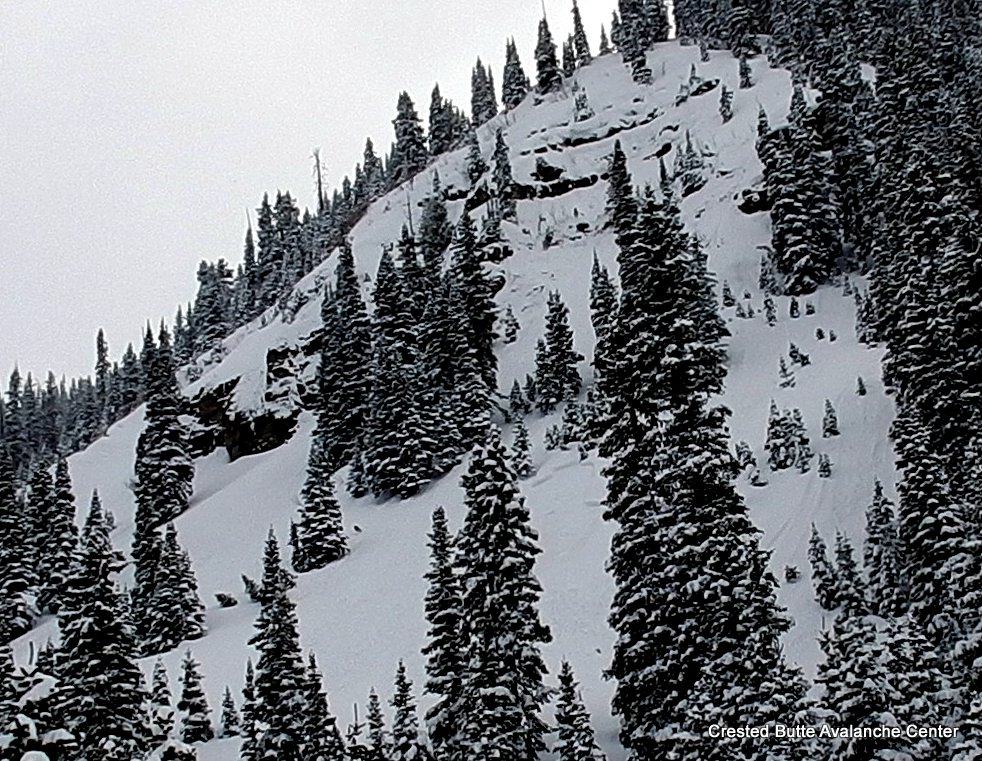 NE aspect BTL. Same small, natural storm slab as previous pic, but zoomed out for sense of terrain feature. Also some very small sluffs came off of those cliffs. 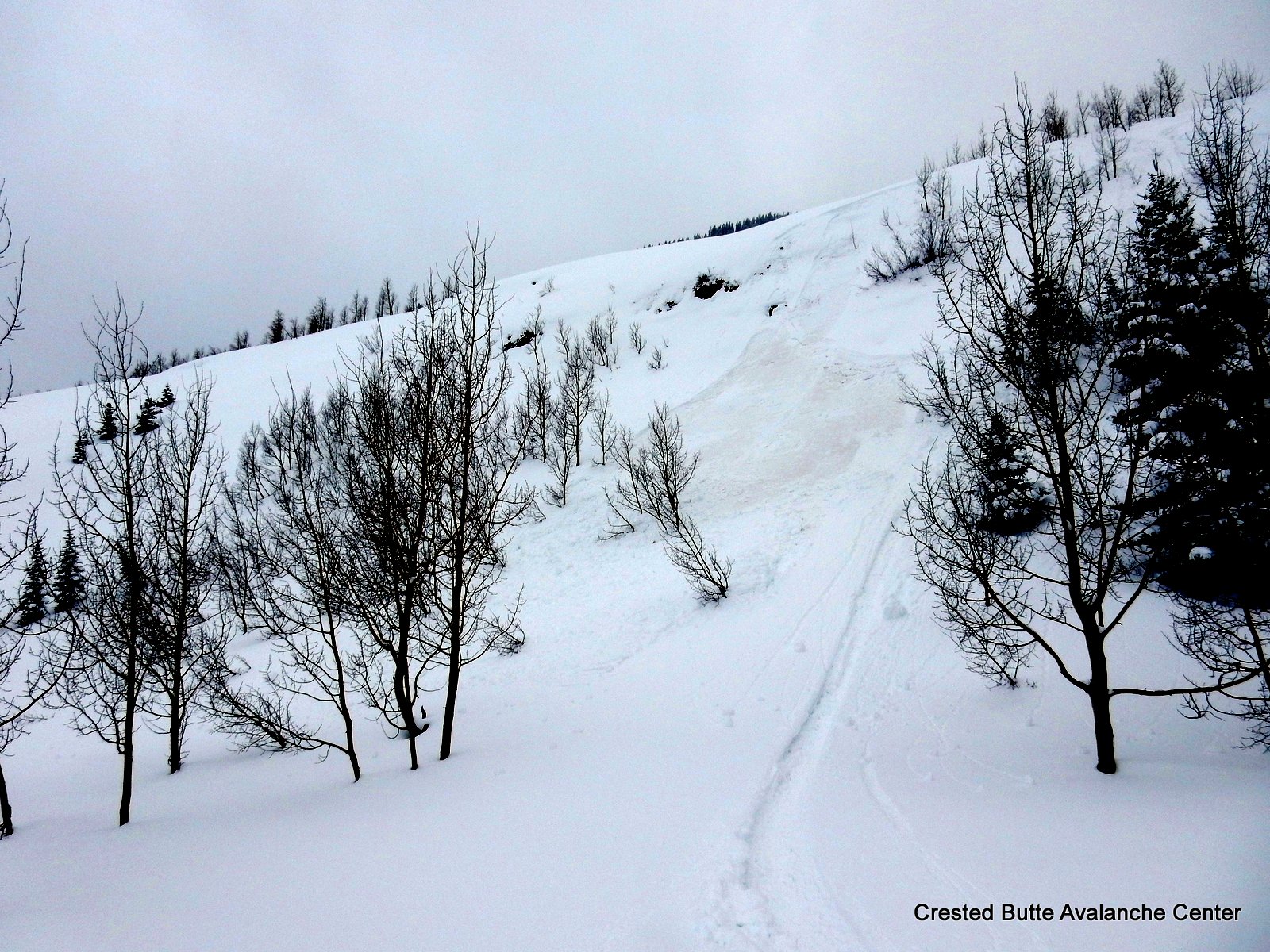 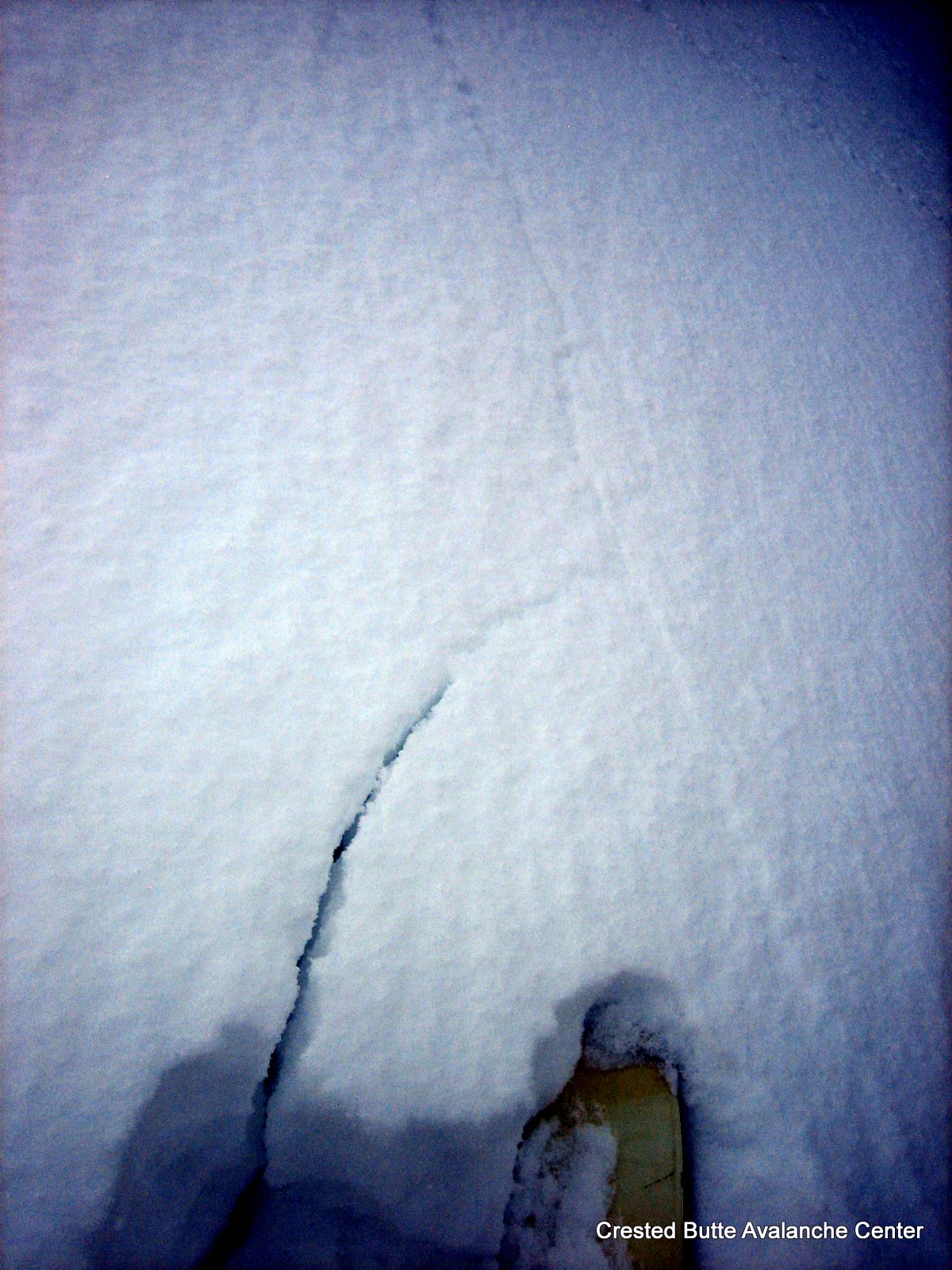 Shooting crack on a facet layer below the storm snow. NE aspect NTL. 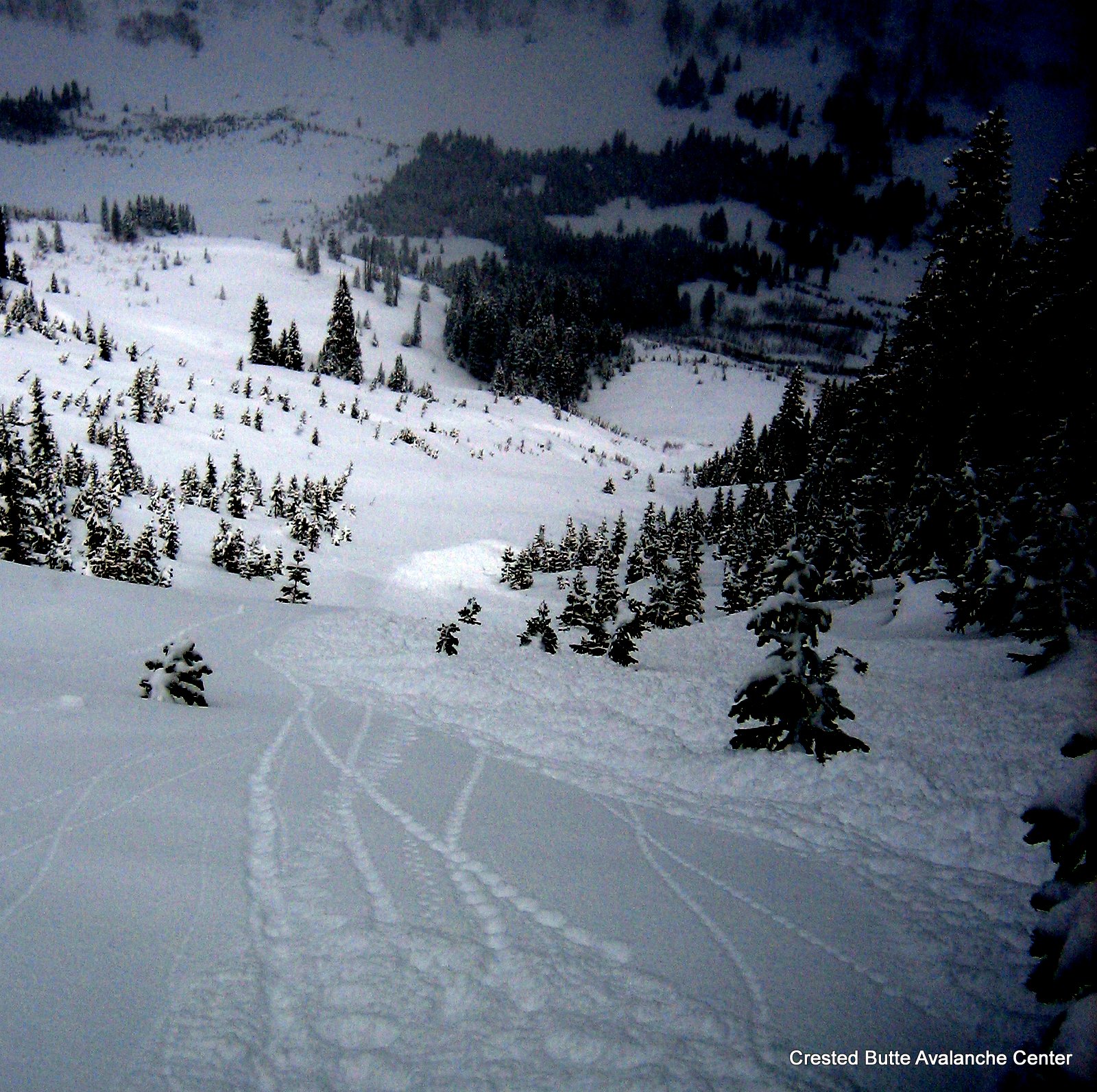