Avalanches: Intentionally ski triggered a small persistent slab avalanche on a wind-loaded feature just off a road cut. The avalanche broke in two places: On the most recent interface about 10-15 cms down from the surface, and on the 3/10 interface which was buried about 40 cms.

Snowpack: I stayed below treeline all day near the border of the NW and SE zones. In the protected areas where no wind loading has occurred the snowpack is very weak top to bottom. Generally, no slab avalanche concerns on protected northerly slopes due to lack of a slab in this area. As I stepped out into open skied, wind-affected areas slabs became more common. Slabs were generally soft but did reach 1F hardness just above the 3/10 interface on the slide I triggered. The 3/10 interface consists of 1-1.5 mm facets on due north slopes in this area. 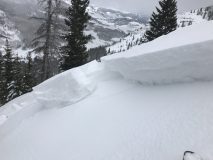 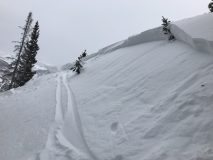 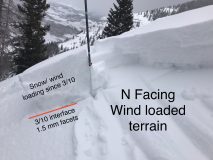 View of different failures on different interfaces in the upper snowpack