Dropping into 2nd bowl to check out coverage, stayed on the rail skier’s Right. Suspect terrain evaluated before skiing was exactly what slide: small convex rollovers formed over rock shelves in the top 50 feet of the line. Used a ski cut on top of one of these terrain features to get the entirety of the snowpack–which was about 18 inches–to fracture. Ran about 500 feet, picking up lots of speed and snow. The crown broke and propagated over pretty obviously terrain features, stopping at the concave gut of the line.

We made another ski cut just to clear the remaining hangfire and got a smaller slide to go, running only about 200 and entraining much less snow. D1.

Snowpack: Ranging from a few inches on South faces to 2.5 feet on NE lines, from the ridge down to Gothic Road. F-4F slab sitting on about an inch of 2-3mm facets. 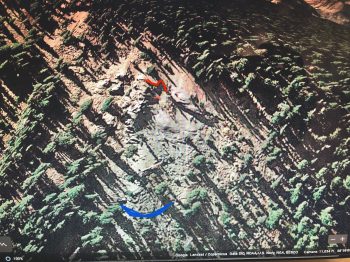 Estimated: Crown in red, debris pile (rough) in blue. Possibly could have run a bit further, hard for me to see on google earth. 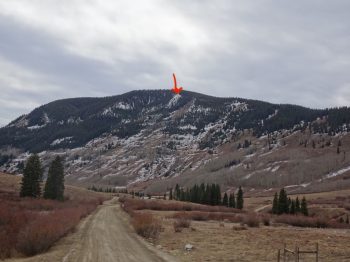 Photo taken early November, showing where the little bit of October snow had survived on Snodgrass before it was later buried on November 6th.