Weather: Comfortable air temperatures throughout the day. Partly cloudy skies on the increase during sunset. Winds at ridgetop ramped up around noon from WSW. Some flagging on a few of the highest peaks and slight transport on near treeline ridge.

Snowpack: Ascended east and northeast facing terrain and found fresh surface hoar growth up through ridgetop elevations.  6mm near valley bottom and only 3mm near 11400′; even southeast slope at 11200′ had small surface hoar around 1230pm when we passed through.
Poked a quick hole around 11k on a northeast-facing slope found an HS of 120cm; I believe this slope may have avalanched very early in the season as it appeared to be slightly shallower and weaker than expected. Performed ECT to test the facet layer that was buried at Christmas, but even with 40cm of settled snow above the interface(still mostly F hard with small bit of 4f) a slab has yet to form, ECTN 12 result. Quick shovel tilt test revealed interface beneath the New Years storm; this interface is only 12cm below the surface at this location as winds have stripped some volume in the past two days. Tested the 3mm to 4mm basal depth hoar with a Deep Tap test, DTM.
Snowsurface on sunny slopes became slightly moist below treeline in the afternoon. 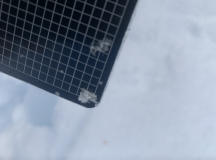