Oooo man, destruction out there from the last several weeks. Some more recent storm slabs to D2, otherwise a whole bunch of deep slabs that would be deadly to tango with. Some of these failed within the last week, and some within the last couple weeks. To summaries, the majority of these avalanches were very large, destructive, and unsurvivable. The D3 to D4 avalanches often finished with wet flowing motion after the initial powder cloud.

Of particular note. The D4 in poverty gulch is difficult to describe in words or pictures. This avalanche was previously reported for taking out a new structure. The crown must have been near or over a mile wide from SW to W facing terrain. Mature pine trees where bent over by the powder cloud and initial flow, with wet flowing debris pushing down the upper Daisy Creek. I coudn’t imagin how deep the debris are out there.

Snowpack: Quiet and supportive would be the best way to quickly describe the snowpack. NE was staying dry, but round the corner to SE or S and the upper 10cm’s of the snowpack was moist in the early afternoon. Looked at a bunch of westerly terrain that was dry at 1pm, guessing the sun got to it in the afternoon. Low angle northerly slopes were also warming from the sun. A few more specific data points below.

ESE, 11,600ft, 32 degree slope, in the upper Daisy Creek. HS 5m+. Dug down 160cm. No layers of concern in this pit. CT and DT tests where ineffective in layer identification. Burping the baby helped, but….

SSW, 9,400ft, Low 30 degree slope, in the Slate River Drainage. Attempted to target a snowpack structure that would be similar the the very large natural avalanches that crossed the Slate River Rd on southerly facing terrain. HS 212. Again, a CT test in the upper 130cm’s of the snowpack was ineffective for layer identification. The layer of concern looked to be a soft and faceted crust about 45cms off the ground. Otherwise below that got into larger grained and moist facets. 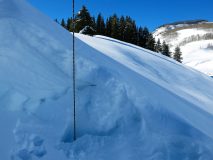 Example of the large cornices hanging about 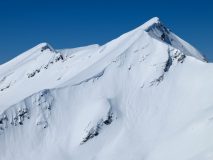 Massive wet debris in Middle Anthracite Creek. These debris looked to come from near the west side of Agust 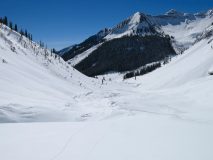 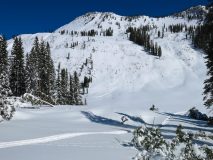 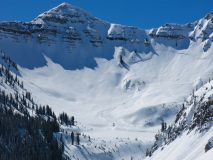 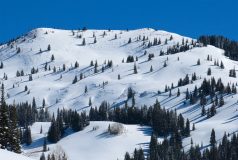 Old slabs on westerly facing terrain in the Slate 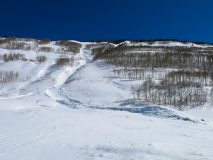 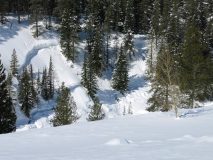 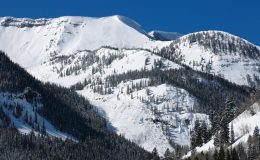 A deep slab avalanche can be seen in this picture. From another angle you could see an expansive crown running through much of Redwell Basin. Debris looked to poor over the lower waterfall and may have hit OBJ Creek.