Avalanches: This short afternoon tour revealed plenty of recent avalanche carnage in the Slate River. These avalanches likely failed some time on 12/14. NE facing aspects were again the bullseye for activity, at both BTL and NTL, or both sheltered and wind-loaded slopes. The crown heights closer to Crested Butte looked a little smaller, while the crowns I got closer to in the Paradise Divide area, were about 1m deep on average. These avalanches were failing at the ground in the well-developed Facets and Depth Hoar. Many crowns were soft-looking as more recent snow and the wind was trying to hide them. It is certainly possible that some avalanches ran on mid-pack persistent week layers, but more investigation is necessary to make that determination. Avalanche size was mostly in the D2 range. Some smaller and some slightly larger.

Lots of interesting pocket avalanches and crown lines along Climax and Schuylkill Ridge that would be interesting to see why those crown lines failed the way they did. SH distributions, or old snow distribution maybe? The largest avalanches I observed were in the Purple Ridge Area. Of particular note, the palace proper looked to have several deep crowns spread through the main avalanche paths.

All in all, visibility sucked. Crown lines were already getting soft looking and debris were difficult see with these conditions. NE was the bullseye.

Weather: Overcast, light snow adding up to an inch or so, calm winds, and dropping temperatures.

Snowpack: The recent snow has really set up. Ski Pen 15 and Boot Pen 60cm. HS was now in the 100cm to 165cm range on the slopes we traveled. No obvious signs to instability. 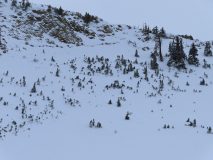 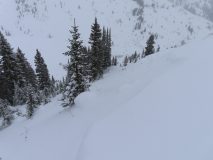 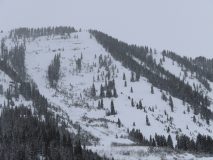 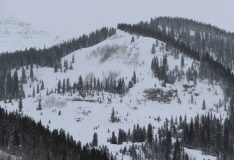