Avalanches: At the moment, avalanches are currently documented in photos.

Weather: Hot and heavy. Calm winds in the Slate River Valley. Light to Moderate winds in lower Brush Creek in the Afternoon. Blowing snow could be seen off many peaks and ridgelines throughout the day.

Snowpack: Started a late morning off in the Slate River Valley near Pittsburgh on primary SW facing slopes but a little south and west in there too. Low elevation between 9,500ft to 9,800ft. #tired, didn’t make it very far. No significant signs of instability while traveling on those slopes. The 2/4 crust was down about 30cm. The snow on the crust was thick from both quick settlement and the warm temps. There will be a new surface crust on some of those slopes. The 2/4 crust was unreactive underfoot and with some extra effort. In low 30-degree terrain that crust was around 3cm thick. I searched for areas that the crust was thinner and still couldn’t get a collapse. Boot Pen was just to, or just below, the crust depending on the slope angle. Hand Pits were difficult to pull off the Storm Slab and didn’t produce results on the 2/4 crust. Got one very small result on a wind-loaded steep thing where the new snow released as a very small slab on the 2/4 crust.

Got a quick look out Lower Brush Creek in the afternoon. Measured about 7″ of newly settled snow on a protected and shaded slope. Sunny slopes were zapped back to just a couple inches new. Plenty of bushes about. 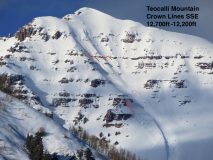 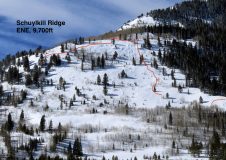 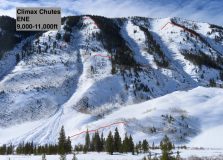 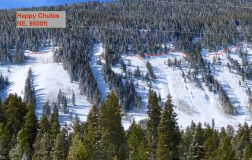 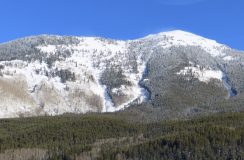 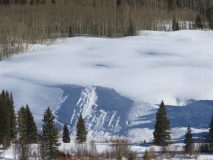 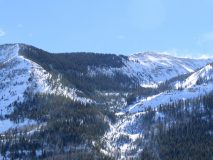 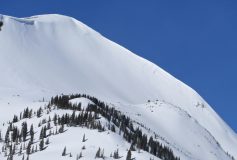