Avalanches: Skier triggered shallow soft slab (crown approx 6″) around 11:45 AM. Relatively wide crown (see photo – not sure on scale, circle on photo is where the skier dropped in); slough stopped approx 2/3 down the aspect. Skier able to ski out of the moving snow. It appeared that another slab on skier’s right was also triggered; possible remote trigger further skier’s left under a cornice (the party of 4 was not certain if the latter slide noted was there at start of ski – unable to determine from above cornice, but worth noting). Second photo shows smaller slab that was likely triggered remotely. This was the first skier to descend, making some of the observations from above difficult to determine.
Weather: Mid-20s; partly sunny; morning wind when skiing up Red Lady, but not wind at the time of the event.
Snowpack: One very small roller noted on the aspect that was skied. We noticed what appeared to be a natural wet slide was noted in Red Well basin on the east facing aspect earlier in the morning. 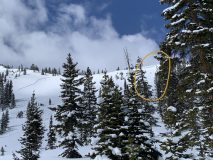 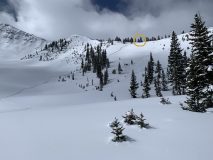