Avalanches: Investigated the skier triggered avalanche above Long Lake. Aspect of avalanche was E and ENE. A side view slope angle estimate put the average steepness around 37 degrees. Crown depth along the flank (appeared to be near the average) was ~50cm. Total snowpack depth along flank was only about 125cm. The avalanche failed in a layer of weak faceted snow beneath a thin soft crust. The slab itself was relatively soft with hand hardness up to 4finger. Debris piled up deeply on the lake ice up to ~280cm in some places because of the abrupt change from steep slope to a completely flat lake surface.

The site of this avalanche is a good representation of a below treeline location that can still produce a dangerous avalanche. Relatively shallow snowpack, generally less than 140cm, with a soft slab present resenting on a pronounced weak layer.

Snowpack: Overall the snowpack was very weak in this area; a ski pole, basket side down, could penetrate the snowpack full depth. 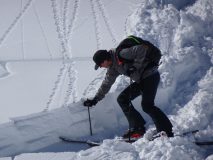 Crown depth along flank was ~50cm. Ski pole is 125cm and pushed all the way to the ground. 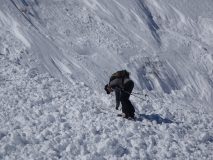 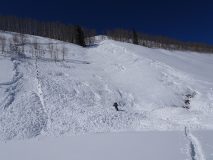