Visibility was poor in the afternoon. Observed 1 D2 natural avalanche near the Nuclear Chute in the Purple Palace Area. ENE facing terrain at 12,200ft.

Heard of two other Natural Avalanches around the same time in the afternoon by Ruby Mountain. Again poor visibility but sounded like D2 debris piles coming out of southerly and southeasterly terrain in the alpine. This slabs could have broken into old snow layers or pulled out within the storm snow, accumulating mass as they ran.

Weather: Overcast with just a little break in the clouds during the afternoon. I was only out for a few hours in the afternoon. Calm winds started to pick up as the clouds broke up a bit. Those winds seemed to be the culprit behind a couple of natural avalanches in the Ruby Range.
Snowpack: Summed up in this video. About 12″ new snow since noon on Wednesday. This new snow is adding load to the current PS avalanche problem. Also got some small shooting cracks in the upper 10″ of the storm snow. 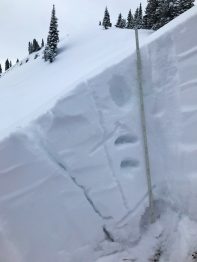 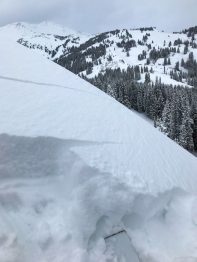