Weather: Clear skies to start the morning with building clouds by noon and mostly cloudy skies by 230. Temperatures were warm and with solar in AM were able to soften E-S slopes below treeline. As clouds moved in midday, the winds also picked up a bit BTL to low 10’s.

Snowpack: Moved through shallow below treeline terrain in Brush Creek and dug a few test profiles near existing crowns that failed around 3/7. HS on E-S-W aspects ranged from 150 to 175. Each hole I poked in the area had 30 to 45cm of moist rounding DH at the ground. Each site also had Pencil hard snow in the middle third of the snowpack-really dense slab. No surprise with ECTX at each site.

The avalanches on E and NE in the area looked to have failed on the basal weak layer. Inspected one old slide to confirm and referenced the visual depths of other crowns. The avalanches on SW and W looked to have failed at two depths- near the 2/28 interface or in the basal weak layer. Locations with HS below roughly 170cm have just over a meter slab resting on very weak basal snow. I would expect to find this structure throughout lower Brush and Cement Creeks and other locations down valley from CB. 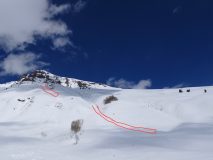 Couple of wet loose avalanches from past few days on S aspect. The one on right was long running-D2