Viewed what appeared to be numerous shallow human triggered D1’s from yesterday that had refilled with about 5inches overnight. Was able to skier trigger several small pieces of start zones that were not impacted by travellers yesterday.
I had zero visibility outside the small bits of terrain I was above and certainly could not see any other avalanche activity on adjacent mountains.

Weather: During the course of my walkabout snowfall rates varied between S-1 and S1. With around 2 inches of accumulation from 1100 to 315. On the uptrack winds were very light even in wide open terrain. Large tall trees near ridge top were holding lots of storm snow until around 145pm but during descent around 230 winds began to pick up at this location and snow started being blown out of trees. Open terrain near parking lot was actively drifting at 315.

Snowpack: I measured HST at 11,000′ and found about 14.5 inches with 1.15 SWE. While walking in flat terrain I was able to produce small shooting cracks up to a ski length. Walking along steep northeasterly facing terrain at 11,000′ I was easily and predictably able to trigger small D1 Storm Slabs on terrain steeper than 35 degrees however there was lots and lots of skier traffic yesterday during the first half of storm which cut up most of the start zones and/or released small slabs. But every piece of steep unmolested snow I was able to touch released or slumped. All of this activity was in a thin layer of weak low-density storm snow a cm or two above old snow even though a few locations had small surface hoar present at the old interface – go figure.  The bottom half of the slab was fist+ in hardness. There was no real evidence of wind effect that I could see, but the ridge top is well forested.
While exiting the area I found a slope that was more easterly, less north, that had a bit of open terrain above it and found a drifted start zone about 20″ deep. I made a fast ski cut conservatively just short of the slope and produced a shooting crack about 30 feet but the slope failed to release. 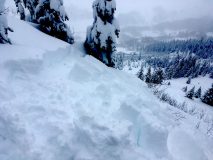 D1 storm slab, triggered as soon as I approached, slab was just over a foot thick