Snowpack: The sandbox is trying to come back, but thankfully it’s just the surface snow for now. The top 20cm of the snowpack was faceted and weak. That made for some nice soft turns, slippery skinning, and fuel for small loose snow avalanches.

We were hunting for a below treeline, NE facing snowpack, with a total snowpack height in the 100-120cm range. That’s just what we found and the end goal was to get more data about the current persistent slab problem. The PSa structure across an individual slope was variable. Sometimes complexly weak, and sometimes a 1F mid-pack above the 12/10 facets. So we could sum up that avalanche problem as “Isolated” in the terrain.

For test results. We observed no signs of instability while traveling on slopes in the mid-30 degree range. We tried doing the standing jump thing, hitting some other jumps, taking a ski off and punching… quiet. We dug two pits at locations with 1F mid-pack over the lower layers of concern. ECTX and ECTP 22 on 12/10 interface. We would estimate the sensitivity to fit “Stubborn” more than “unreactive”. Put a bunch of snowmobiles or skiers on the same slope and there are a couple of spots that they may just produce a large slab avalanche. 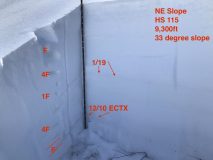