Avalanches: A number of wind and/or storm slabs that released naturally during the Christmas cycle. The largest was a wind loaded storm slab. Definitely broke as a windslab and propagated further down slope into a storm slab, good stuff. ooo gets better, the debris triggered multiple small windslabs near the valley bottom. Windloaded storm slab that triggered multiple smaller windslabs or as coding would say, SS-N-R3-D2-S.
Weather: Clear sky with clouds starting to stream in, in the later afternoon. Calm winds in the valley with some moderate westerly gusts at ridegline.
Snowpack: Same same as this previous obs, just more snow and some wind effect. No obvious or observed sings to instability on supported slopes up to 38 degrees. Defiantly wind loading below ridgelines from our previous storm. Easy to just simply avoid so no more details. 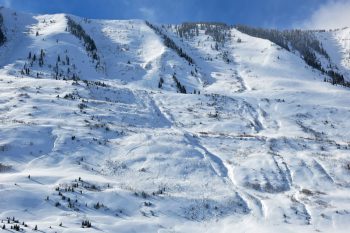 The great wide open on Schuylkill. Small windslabs down low, bigger slabs in the start zone that are difficult to see in this picture. 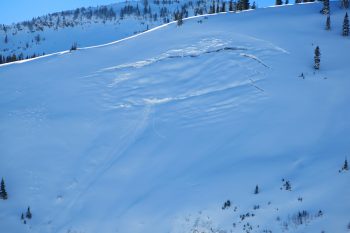 It back. The glide cracks near the head of the Slate River Drainage.