Got a view of a cornice failure off of Scarps ridge the triggered a D1.5/D2 sized slab.

Snowpack: Traveled through S and SW terrain below treeline. Early in the morning surface crust were supportive to skis. As the day warmed up surface crust broke down by about 1pm on SE aspect at 10,500′. HS on this protected slope was 190cm. Top 12cm or so became wet with the buried 3/12 crust started to soften as well. Perc tubes were present between the 3/12 and 3/6 crust. The 3/6 crust was down just 45cm. Snow below 3/6 was moist halfway down to 2/28 crust.

Descended a SW slope, very near a couple of D3 slides that failed around 3/7, and found that this slide likely failed in faceted snow below the 2/28 crust. HS through the start zones looked relatively shallow from wind this season and bed surfaces were very shallow will lots of grass and rock sticking out. We were able to trigger very small wet loose slides, and pinwheels by about 3pm on these slopes. By about 10,000′, the snowpack on SW was wet at the surface with a moist, soft crust below and moist snow all the way down to the lowest crust with very weak faceted snow at the ground. HS was generally around 130ish cm through this terrain.

Got views of snowmo highmarks in an alpine bowl with S through SE aspects. Half of this bowl failed around 3/6 or 3/7 in a very large D3 avalanche. The highmarks hit the drifted in bed surface and the intact portion of the bowl without results. 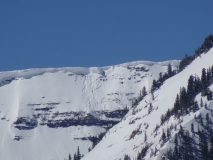 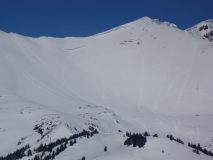