Avalanches: From 75 feet away, we remotely triggered a persistent slab that failed on depth hoar near the ground, about 2.5′ thick. The avalanche was small in size (D1) because it was on a small terrain feature. See photo.
Weather: Calm winds where we traveled, audible evidence of stronger winds aloft. Very light snowfall with a few, shortlived moderate pulses. About 2″ storm total.
Snowpack: Traveled to the shallowest part of our forecast area and found the depth hoar layer about 50 to 80 cm down, (12/10 layer) is very sensitive to human triggering. We experienced large, rumbling collapses and shooting cracks on almost every slope we crossed (SE and E aspects). Shooting cracks would span entire slopes and through mature aspens. Collapses would visibly shake trees several hundred feet away.  Say no more, snowpack, we’ll stick to low angle terrain.
In Lower Cement Creek (down valley from Deadman’s Trailhead), snow depths are still quite shallow and there doesn’t appear to be enough volume in the start zones or tracks for natural activity to hit the road yet in most terrain 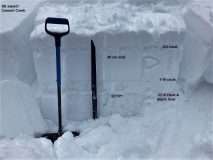 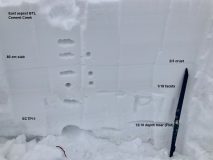 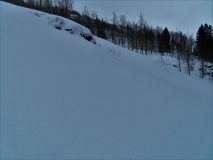 One of dozens of shooting cracks 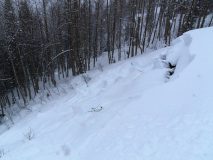 Remotely triggered persistent slab from 75′ away 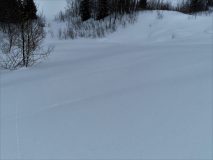 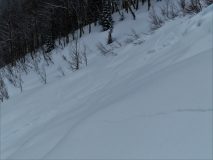