Weather: Moderate northwest winds at 13,000ft with a few guests on lower ridgelines. Clear sky and warm temps.
Snowpack: Traveled through lots of alpine terrain with only surface obs and quick informal tests. The most worrisome looking areas where old plastered wind slabs, and anywhere a big slope tapered near rock outcrops leading to a shallow snowpack that you could feel obvious persistent slab structure below. We used cation and avoided plenty of areas, and didn’t observe any obvious signs to instability where we traveled.

Northwest facing slopes above treeline are well worked over by the wind. Patches of textured cream with lots of firm texture and windboard. Hugely variable snowpack depth of course and plenty of slopes in extreme terrain looked like they could be in the 60-130cm range and likely harboring some form of persistent slab.

Probed around on some northfacing terrain at 11,000 feet that had below treeline characteristics. Ski pen was about 25-30cm and HS in the 180-200cm range. The bottom 30cm near the ground was a little punchy otherwise progressively harder layers is all you could feel via probe.

Southerly facing slopes also had lots of wind effect. With the same wind textured cream, wind board or firm wind texture scattered about. As snow surfaces started cooling in the afternoon a widespread thin crust was forming.

Avalanches: Had good views of southerly slopes in the higher peaks snow favored part of the zone. Saw very little wet loose avalanche activity. The south and southwest facing slopes off of Schuylkill Mountain were the exception. With several small loose wet avalanches failing on the steep slopes near rock outcrops. 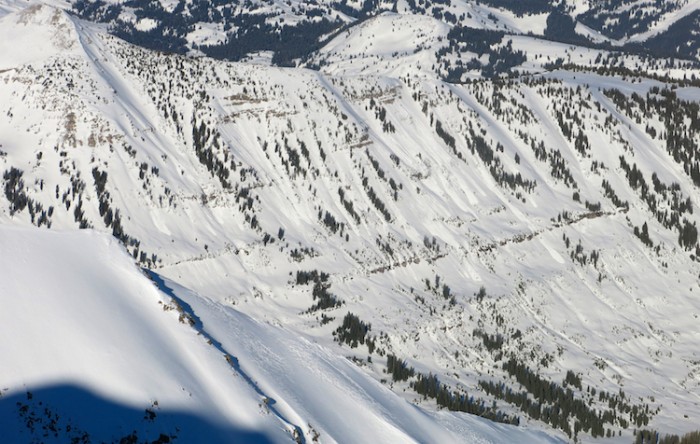 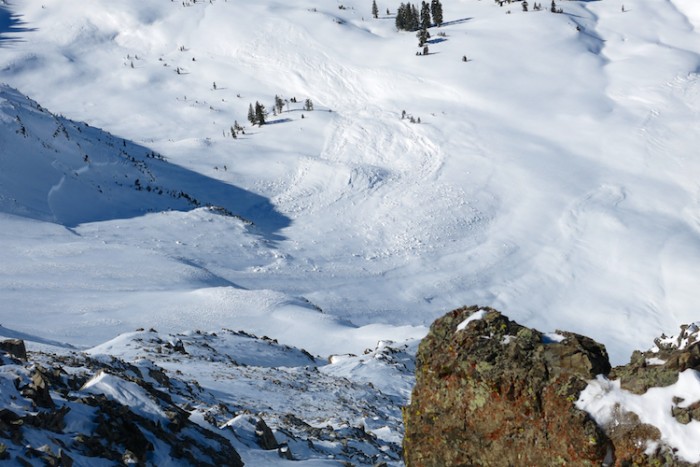 Natural Persistent Slab that failed around February 1st. Westerly aspect around 11,000ft. Looked like it may have been triggered by a smaller wind slab failing higher up in the terrain.