Viewed several fresh avalanches, the Evans basin slides were reported by a previous ob, but not sure from their ob if the saw all of these.
Evans Basin-East, D2 x 3 – from a distance looked to be 2 to 3 feet deep.
Axtel- NE, D1.5 – view at oblique angle, several old crowns above and what appeared to be freshish crown that was several feet deep but narrow

Weather: Left trailhead at about 12ish and this time winds were honking at the parking lot, blowing and drifting. Winds continued throughout the tour, but were lighter at our protected location until we reached more open near treeline terrain. Drifting and transport were visible above treeline on Axtel, Coon, and Redlady throughout the tour. Winds appeared to be drifting out of NW – N and depositing snow onto southern and eastern portions of the compass. Looked like snow was being blown lower into start zones.

Snowpack: Investigated snowpack on a near treeline SE slope. HS ranged between 120 – 150cm with somewhere near 140 being average. Of note was a buried SH layer down 30 to 45cm, we poked a couple of holes. The 1/15 crust was down around 55-60cm (this was a crust/facet/crust sandwich). Test results were CTN and ECTX. Foot pen. about 35cm and ski pen about 15cm. No cracking or collapsing 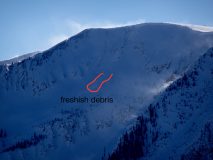 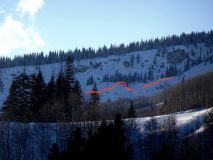 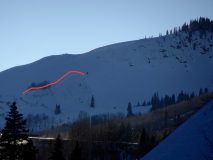