Avalanches: Visibility was fairly limited during most of our tour today. We weren’t able to get many solid views on surrounding mountains, thus unable to observe any recent activity on adjacent terrain. However, the views we were able to get of the west facing terrain on Gothic demonstrated the recent winds have stripped much of the snow in the usual spots and have cross loaded the other usual features.

Weather: Overcast with occasional periods of obscured sun. Variable winds, average winds during our tour was probably 10 mph with the highest gusts in the 20-30 mph range. Winds were cold and mainly out of the north. Light snow at times but minimal accumulation. Colder temps but not as cold as we anticipated. Probably a high of 10ish while we were out.

My partner and I were able to observe some of the old crowns and debris in the open terrain on Coney’s, which have previously been mentioned in recent observations, indicating that this particular terrain hadn’t yet completely filled in with recent snow and drifting. Fully aware of the heavy winds and recent snow (and recent accidents– rest in peace, JS), we had no intention of skiing anything with consequence. Out of curiousity though, on the first lap, we decided push up to the ridge to test leeward slopes which were clearly drifted and maintaining reactive slabs. Upon gaining the ridge through the timber, we immediately started putting weight on wind loaded slabs just below the ridgeline. Probing with our poles we found obvious differences in snow depth from the ridge proper to the leeward side of the ridge (approx. 25 cm–80 cm +). Intitially we weren’t able to produce any collapsing or cracking, but it was quite apparent the slab was there, regardless, and it was waiting for someone to ski through the perfect spot to trigger. After traveling up the ridge around 150′ we began to feel slightly stiffer snow and our pole probes proved the snow was getting deeper in the more open spots on the leeward side of the ridge, as compared to just a little lower on the ridge where it was slightly more protected. We eventually were able to trigger a slab on an obvious drifted feature, with minimal effort. The slab failed somewhere mid-snowpack, which one assumes would be the persistent weak interface(s) from early December. The slab moved with suprising energy but only traveled a few inches downhill. Slope angle where slab was triggered was around 30 degrees. Propagation wasn’t huge, probably fractured 30′ laterally. Regardless, we certainly could understand the the consequence of the potential avalanche in this terrain…not good. Also worth noting, as I skied first (in a much safer entrance), my partner felt and noticed a huge collapse, which we assume propogated the entire slope and would have entrained the slab mentioned above.

Not trying to be on a soap box or anything here, but this is a particular area which is always concerning to many. Coney’s/ Anthracite Mesa can be great skiing/ riding, don’t get me wrong, but I do feel this zone can present a false sense of security for some people. I usually wouldn’t post a huge observation like this, however, I think it’s important to reiterate everything CBAC is telling you. The backcounty is dangerous in Colorado and this season is certainly no exception. The snowpack is dangerous and unpredictable, and there are many complexities which can turn a fun day into a life or death situation. Please don’t ever assume things are safe when you are in avalanche terrain. Get home safe to your family and friends. Happy Holidays my friends and please be safe out there.
Snowpack: Dangerous, variable, and touchy. 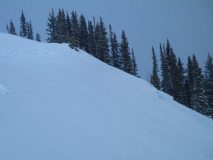