Triggered two avalanches from ridgetop D1’s but enough volume to take you for a ride and pound you into trees and rocks, one on east, one on northeast (see photos).
Observed a natural on a north-facing feature that ran early in the day, as bed surface had just a dusting of new snow, D1.

Snowpack: Storm totals since Friday morning were up to 35cm (13″) at 11,000′, 130pm. Measures SWE was .9″. Snowpack was often ‘trenchy’ with little support on east and north aspects. It was easy to trigger D1 avalanches on slopes greater than 35 degrees that faced north through east. Not enough volume to bury you, but enough to hurt ya from hitting objects. Fractures propagate up to 75 feet. No collapsing or remote triggering experienced. Needed to walk right to the edge of the slope for slabs to break. The weak basal snowpack was quickly entrained as slab ran. 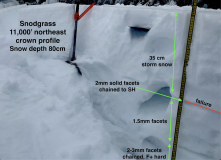 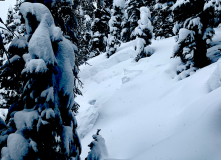 Natural avalanche on north aspect that ran early on 12/12, just a dusting of snow on bed surface. 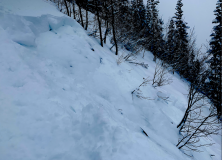 Crown from intentionally triggered slide from ridgetop on east aspect. 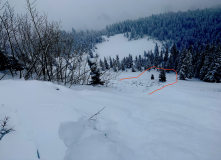 Looking down path of avalanche on east aspect that gouged close to ground midtrack. Hit the trees below with gusto.