Avalanches: Observed a number of avalanches in the Cement and Brush Creek drainages…all from drifted terrain features. Two slabs in North Bowl on Cement Mountain D1.5s, D1.5 on very drifted NTL feature on Hunter Hill southeast aspect, good size D2 near White Mountain on east aspect ATL(looks to have failed near ground), 5 D2ish slides on east-facing slopes ATL in Twin Lakes drainage(long-distance view – some looked shallow, some looked deep failing)
Weather: Largely cloudy skies but often thin cloud cover with sun visible through clouds. Air temps were mild enough to moisten snow surfaces on south and southeast slopes below 11K. Winds were generally light – no observed transport off high terrain.
Snowpack: Traveling along Cement Creek corridor snow depths of 60cm near Deadmans TH at 9400′ and ~90cm at 10,800 near Hunter Hill’s east side. Skinning between 10,600′ and 11,800′ ski penetration was generally 8″ with support coming from windboard created by 1/13 wind event – occasionally in sheltered areas ski pen reached deeper than a foot or so. No signs of instability below treeline in sheltered areas (see test profile photo of east BTL slope). Wandering through a near treeline basin I was able to produce a few collapses with one being large, but not rumbling. I dug a profile on a slope adjacent to collapse with recent and previous drifting and found a poor looking structure. Two interfaces can produce avalanches – one below the recent storm snow (failing in facets below a windboard) and large-grained Depth Hoar near the ground (see photo). Applying this test profile to observed avalanches in the Brush and Cement Creek drainages it seems to fit well….shallow avalanches failing at the most recent storm interface and deep avalanches failing near the ground. The features that looked most concerning were near treeline or above treeline but immediately below ridges that allow for good loading and limit scouring…highest terrain (greater than ~12,500′ or so) often looked beat up by the wind. A deep, good looking leeward slope in these areas might be more or at least as concerning to similar slopes in Northwest Mountains/Ruby Range because weak layers look worse out east. 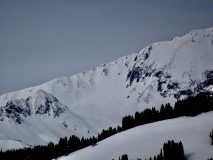 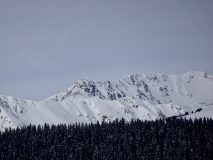 A string of avalanche on easterly alpine slopes above Twin Lakes drainage, some shallow, some look deeper failing (hard to see, binos worked better than camera) 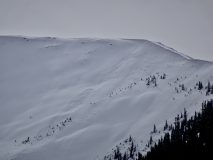 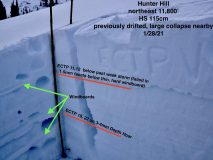 Test profile for northeast aspect near treeline – large collapse near by 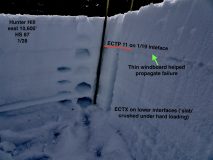 Quick profile from below treeline, sheltered site near upper end of Cement Drainage 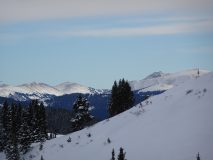