Observed avalanche activity: Yes
Avalanches: Visibility was obscured by low-level clouds during my tour so I did not get any views of drifted terrain in the Ruby Range. I intentionally triggered a shallow slab by kicking a cornice on an east slope at 11,800 feet, D1 in size – hardly big enough to knock you over let alone carry you. Max crown depth was 10 inches but only extend downslope 15 feet, slowly ran 150 vertical feet.
Weather: Mostly cloudy skies with low cloud cover obscuring visibility. Sporadic snow showers without any accumulations during the day. Moderate westerly winds above treeline.
Snowpack: I measured 4.5 inches of new snow at 11,200 feet. I walked along an east-facing ridgeline from 11,500 to 12,000 feet assessing slab thickness on drifted terrain and found fresh cornice formation up to 18 inches thick and slabs up to 10 inches thick but slabs quickly tapered off once 20 feet below ridgetop. Cracks ran up to 30 with just a single very small avalanche triggered. Snow available for transport on the adjacent westerly terrain appeared to have largely run dry.

I dug to profiles on easterly aspects at 11,500 feet. One was on the southern edge of east at 105* and I found 5 inches of storm snow resting above a stack of melt/freeze crusts that were connected by ice columns from meltwater during last week’s record high temperatures. This structure appeared quite strong and would tolerate a very large load prior to collapsing (see photo). On the northerly fringe of east aspect at 75*, I found a snowpack that was largely free of melt form grains with several prominent weak layers that formed between each storm during November (see Snowpilot profile).

While descending below treeline I ski cut some tiny facet sluffs on northeast-facing slopes. The facet sluff’s entrained about 10 inches of snow as they ran. 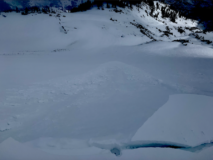 Intentionally triggered Wind Slab on drifted east slope at 11,800. Very small and lacked volume to do any harm. 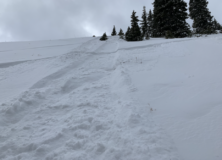 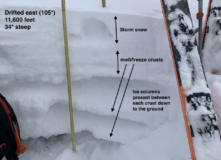 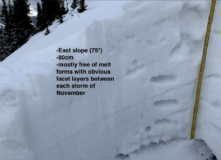 A profile from a “shady” east slope that has multiple very weak interfaces. 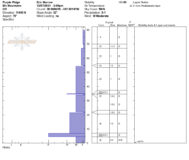 Profile from the “shady” east location.