Avalanches: Several gouging loose avalanches below treeline on east and west aspects (see photos). Views into the upper elevation terrain of Brush and Cement Creeks revealed far less recent wet avalanche activity than areas closer to Crested Butte. Did not observe any obvious Wet Slab activity, even on terrain features that had the same characteristics of observed Wet Slab avalanches nearer to Crested Butte.
Weather: Mostly clear skies transitioning to partly cloudy by mid-day. Moderate westerly winds at ridgetop. Temperatures cooled throughout the day.
Snowpack: Traveling on snowmobiles in the AM was fairly straightforward off-trail with minimal trenching, but as the sun softened, but never fully broke down, surface crusts in the afternoon, snowmobiling off-trail became a challenging task with relentless trenching. Traveled off-trail at 11,100′ and produced a collapse that traveled about 150′ causing around an inch or so of vertical displacement in the snowpack (see photo). Boot penetration in this area was consistently to the ground (see photo). Ski penetration was mostly supportive on surface crusts.

Dug a quick profile on a northwest aspect at 10,800′ with a depth of 100cm (similar snowpack to large collapse) and found meltwater had descended around 50cm down stopping just short of the weak bottom half of the snowpack. The upper 50cm of the snowpack was composed of a 15cm surface crust with 35cm of 4f+ slab (with ice columns present) resting on weak, moist depth hoar. I performed an extended column test and it failed on isolation. The bottom half of the snowpack was moist but did not appear to have been flooded with meltwater yet. Surface crusts on all terrain traveled remained intact during the day; some softened on sunny aspects, but a thin “egg shell” remained which helped to limit Wet Loose avalanche potential. Shoulder and shady aspects below treeline continue to have enough slab structure in the upper snowpack to present future Wet Slab concerns once the meltwater faucet turns back on. 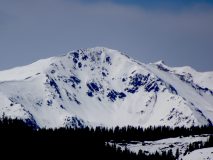 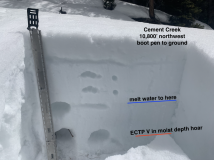 Test profile from northwest slope not far from snowmobile triggered collapse. Depth hoar is moist and weak, but did not appear to have water drain through it yet. 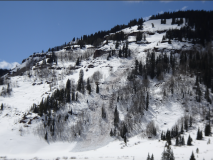 Large Wet Loose avalanche below treeline on east slope. Likely failed on 4/5 as debris did not show signs of sitting in the sun. 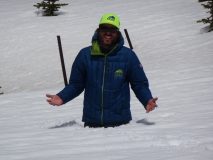 Good example of boot penetration to the ground in this area where that snowpack was around 100cm deep. I took one step off old snowmobile tracks. 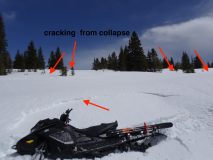 Off-trail snowmobiling resulted in trenching and a large collapse.