There were numerous old, dry loose avalanches from the past weekend on a steep northeast facing terrain feature. Very small in size.

Weather: Clear skies, mild air temps, and calm winds.
Snowpack: Ascended from Pittsburg up underneath the east side of Schuylkill Peak. While ascending below treeline snow surface on north and east aspects were dry and weak with remnants of patchy surface hoar laying flat. A pretty poor surface for an incoming storm to fall on. As we transitioned towards Southeast the snow surface transitioned to a wet surface. These Southeast and south slopes had a thin layer (3cm) of moist facets sitting on an old melt/freeze crust. Later in the afternoon while descending this snow was beginning to refreeze and will likely be a slick crust as the new storm comes in. None of these surfaces will likely bond well to the incoming storm.
As we ascended higher, up to 11600′, the snowpack remained weak and faceted on north and east aspects with no current slab structure. On southeast slopes near tree line the snow surface remained dry and weak. Only slopes that were very near due south had a melt/freeze crust at the surface at this elevation. 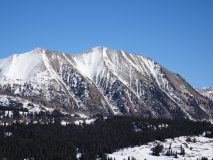 west side of Gothic Mountain 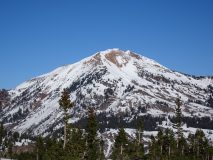 west and south aspects on Baldy 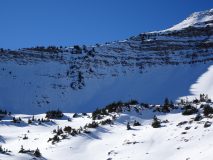