Observed avalanche activity: Yes
Avalanches: More skier triggered sluffs. The most notable was initiated on the first turn off the ridge and ran 1,000ft and through a good section of 35-degree terrain in the avalanche track. That part wasn’t necessarily new. However, the additional new snow added enough volume to push this sluff to the line of a D2 avalanche. NE facing slope.  Low in the track, the moving loose avalanche released a small, thin hard slab where previous winds drifted snow.

Weather: Mostly cloudy with convective bursts of snow moving through like a summertime thunderstorm. During the clearings, the snow was clearly blowing off of Scarps Ridge and periods of moderate winds where drifting snow at lower NTL elevations.

Snowpack: 4″ of new snow was measured at 4pm, 9,700ft. We didn’t encounter any changes to the current list of avalanches problems. Mostly just added volume for the loose snow avalanche problem and drifting snow at upper elevations.

The old snow surface in many areas is extremely weak. Similar to early season conditions when we have a large-grained faceted snowpack that is just starting to accumulate new snow. The only difference is that it’s February and the weak layer is widespread. Northerly facing slopes are a sandbox of NSF. Easterly facing slopes and some NE facing slopes had a thin collapsible crust capping those same large-grained and very weak NSF. Some of those crusts looked like they could collapse with little load and aid in propagation. Any triggered avalanche, slab or loose, would then gouge into the weak old snow, gaining additional volume.

South and SE-facing slopes in this area had strong crusts with many peculation columns extending into the snowpack below. Here we couldn’t initiate sluffs in the new snow on 38-degree slopes. 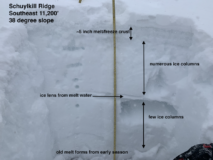 A look at a southeast slope without previous drifting. The old snow surface is a stout melt/freeze crust with many ice columns below. Near future avalanche problems will likely remain above the crust failing in storm snow. 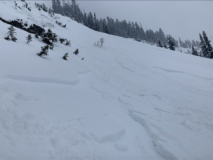 The long-running Loose Dry avalanche pried out a thin hard slab low in the track where previous winds drifted snow into a stiff slab in the depression of this feature at 10,000 feet. 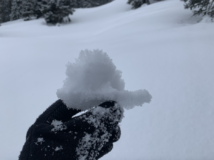 Some northeast slopes below treeline have a thin, friable melt/freeze crust beneath the few inches of new snow.