Avalanches: Visibility was poor most of the day making avi obs difficult. Just one recent D1 slab failed on an east aspect of Baldy right at treeline, crown completely refilled with only debris visible. Maybe crust/facet combo was involved but it really looked more just like a Wind Slab.
Baldy: 1xSS-R1-D1, SE

Snowpack: Storm total at 10,900′, right near Elkton, was around 24cm with 1.1″SWE. Traveled on mostly southerly facing slopes investigating the development and spread of the Persistent Slab avalanche problem. HS across this terrain was around 50cm to 70cm. Below treeline south and southeast aspects are not of much concern, two crusts were present but the lowest was on the ground and the upper one was buried 12/5 with little faceting beneath at this point (just a thin soft slab resting above from latest round of snow). Near treeline, the lowest crust was 6 to 8 inches above the ground with 1.5-2mm facets beneath. But very little snow volume above, no real slab except maybe for the most drifted locations at upper elevations. Near and above treeline locations do have a weak crust/facet structure near ground and could develop a Persistent Slab problem once a slab forms above. See photos for view of BTL and NTL SE structure. 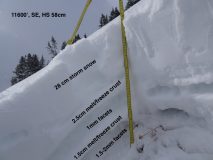 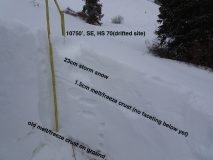 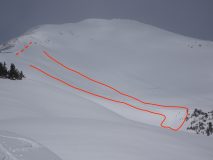