Avalanches: Good views covering miles of terrain. Other then some small dry sluffs I only found one slab avalanche. That was in Baxter Basin, on a northerly aspect at about 11,800ft. A shallow windslab ran into the bowl below, triggering another small shallow soft slab in the new snow. D1.5 in size

Weather: Beautiful clear day. High clouds developed in the late afternoon. Surprisingly light winds even with much of the day spent around 12,000ft. Drifting snow was also far less than anticipated. As gusts would move through, they would drift the snow off the high peaks and ridgelines. Winds seemed to pick up a bit in the afternoon. Cold Temps.

Snowpack: Other than considering some cornice hazards, no avalanche problems were encountered. Tested many terrain features that looked wind-loaded and found nice soft snow with no issues. I would imagine that some other ridge-lines or other high peaks had more of a problem. No wet avalanche concerns at all elevations. Below treeline is mostly dust on crust. Unless that crust breaks down, there are few slopes that looked like they could produce much of a loose wet avalanche. 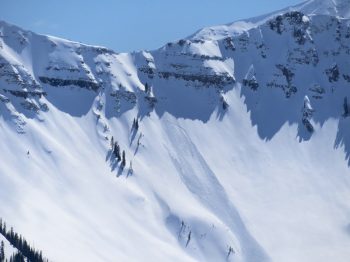 A shallow windslab in the shadows near the ridgeline, ran into the bowl triggering another shallow soft slab in the new snow. D1.5 in size.