One fresh looking avalanche (crown still pretty sharp) on a westerly terrain feature that gets loaded from northerly winds. D1 in size

Weather: Lots of sun with thin high clouds filtering the sunlight. Light winds through late morning and early afternoon; as we left the area around 1pm winds began to blast snow around in the alpine- did not look like much loading just a blustery mess.

Snowpack: On ascent, we crossed a westerly slope near treeline that I had crossed about a week ago and found that it had weakened during this period and didn’t seem to have as much strength – ski pen was deeper than a week earlier. Surface on this west slope was still dry without a sun crust present.

Much of the alpine terrain visible from up high looked scoured and beat up from the previous days wind event.  I bet there were a few small, fresh, thin windslabs out there tucked behind terrain features like the one pictured below. Skied a south facing slope that had 2-4 inches of new snow resting on a semi-supportive crust. Skied through the drifty looking SE facing feature in the area and did not find a windslab. Looks like the wind blew the snow further downslope or into the basin below. At around 11,200 in the basin found a small isolated strip of deposited snow up to about 10″ thick-not avalanche terrain but made for about 10 quality turns. 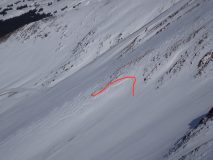