Zone: Northwest Mountains
Route Description: East Beckwith. Traveled to 11,600 ft on SE, E, and NE aspects, with the focus of our observations at or just below treeline.

Observed avalanche activity: Yes
Avalanches: Skier triggered a small loose dry avalanche on a northeast aspect that ran about 800 ft. The sluff did not entrain as much snow as I’ve observed earlier this week because much of the track was stiffened by recent winds.
Weather: Mostly clear, light winds where we traveled. Could see a few periods of blowing snow off of the Anthracite Range this afternoon, more of the sublimating type.
Snowpack: Recent winds have done a good job of reducing the distribution of loose snow avalanches here. Most terrain that we traveled on was textured from the wind enough to keep the faceted snow from sluffing unless you were on a very steep slope (mid 40’s).
We encountered a handful of hard drifted slabs up to 6″ thick mostly near treeline and a few below treeline. On east facing terrain NTL, they produced a few alarming collapses and shooting cracks up to 20 feet wide. On southeast facing terrain, I couldn’t produce any signs of instability with drifts, but we skirted around them nevertheless. While these drifts were generally easy to identify and avoid, there was one terrain feature that appeared to collapse on an older generation drift and surface clues weren’t as helpful. We turned away from a steeper terrain feature that we had planned to climb due to our uneasiness with the problem after that.

We got several shooting cracks and collapses on shallow hard wind slabs.

This sluff didn’t entrain as much snow as I’ve seen in previous fieldwork days because the track was firmed up by recent winds. 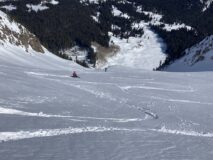 One indicator that you’re in wind slab territory is when your partner face plants in grabby wind board. 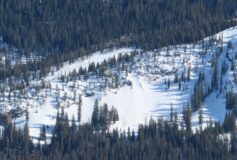 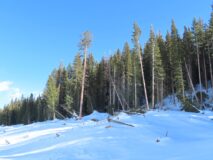 Reminiscing about the good old days when it used to snow around here… Carnage from 12/31 cycle.