Avalanches: D2 natural slab avalanche off of the East face of Gothic along with some smaller slides on Gothic.
On Snodgrass, we noted 3 natural loose snow avalanches and intentionally triggered about 5 others that ran about 400 vertical feet. These were all larger than you might expect because they entrained the 12″ of storm snow along with most of the season’s weak snowpack, generally about D1.5 in size. We probed debris on a low angle bench where several slides had overlapped and it was up to 8 feet deep.
Weather: Moderate snowfall through mid-afternoon (S1 to S3). Moderate southwesterly winds were shaking trees and blowing snow near Snodgrass Summit, but weren’t mixing into the wind protected terrain. We also could see and hear gusts moving snow near valley bottom of the East River.
Snowpack: 4″ of storm snow at the trailhead and 12″ near the summit. The new snow wasn’t quite cohesive enough to form a storm slab except in drifted areas. Very minimal cracking. I felt one collapse on a low angle slope that was on basal weak layers (12/10), about 30″ deep. The storm snow is on a mix of rotten facets and windboard capped facets. The windboard is more common lower in the terrain, facets more common in upper start zones. 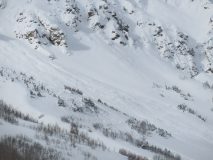 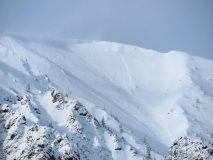 Storm slab avalanche off of Gothic 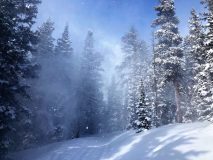 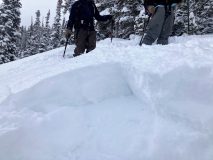 In wind sheltered terrain, storm slabs lacked cohesion for propagation. This is one of the few small pockets that we triggered 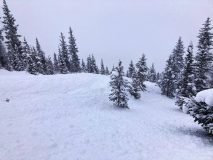 Debris piles up to 8 feet deep from triggered sluffs 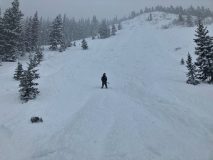 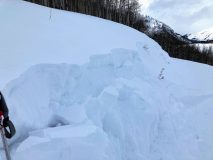 Storm slabs propagated a little further where winds had stiffened the snow.