For the past several years, much of the early season buzz about whether we were going to have a killer winter or a dud revolved (over. and over. and over…) about the pros and cons of an El Niño or La Niña   atmospheric and oceanic signal.

Here is a post from one of my former meteorology professors at the University of Utah and total powder junkie himself, Jim Steenburgh.  He runs a great weather blog that discusses meteorology mostly around Utah, but a ton of his material is applicable to our locale as well.  Bookmark it and check it out! Infer what you can about how the lack of ENSO will affect our weather patterns…the overarching theme being….your guess is as good as mine.  A good perspective if nothing else. 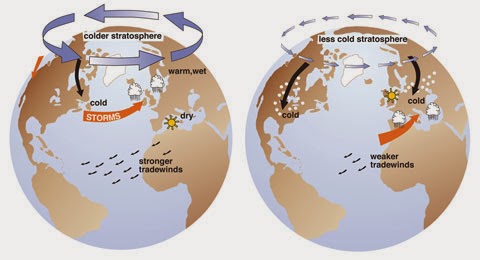 What tilt are we in now you may ask??

These are very interesting (and confusing) but if you look at each graph, you have a neutral AO signal at zero, with the blue bars going up meaning positive, going down, negative. Makes you think a little what phase we have been in for extreme weather, like our early season snows, the Front Range floods in September, etc.
More info here:
http://www.nc-climate.ncsu.edu/climate/patterns/NAO.html
http://www.cpc.ncep.noaa.gov/products/precip/CWlink/daily_ao_index/ao.shtml

I will probably steer some of my posts of this forecaster’s blog to Jim’s blog occasionally.  Enjoy this snowy Sunday…so far I like No Niño…