Weather: Calm to light winds with a few stronger gusts transporting snow. Mostly cloudy sky with convective cells moving through and creating quick bursts of snowfall. Maybe an inch or two of new snow accumulation today, but it was settling quickly.

Snowpack: Potential wind slabs were small and from what I observed were really confined to right near the ridgeline or cross-loaded terrain features. Otherwise, the cream was getting thicker with periods of sun between the clouds. Similar to yesterday’s ob in Washington Gulch, there was about 4″ of recent snow accumulation down low and around 8 to 10″ up higher. No avalanche problems were observed outside of the potential wind-loaded terrain features. One snowpit at 11,300ft on a 33 degree south facing slope had about 8″ of new snow on top of a very stout crust with a matrix of other stout crusts and percolation columns below. 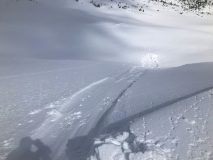 East 11,900ft. Good bit of effort to start pushing a piece of the thicker drift down hill as a small thick sluff