Observed avalanche activity: Yes
Avalanches: Although skies were fairly clear, the thin cloud cover made distancing viewing a challenge. A couple of fresh-looking debris piles above Copper Creek and near WSC Peak on east and southeast aspects (vis was too poor to code with any confidence). Two natural avalanches on shady slopes below treeline in Taylor Canyon (D1’s , these looked older with a bit of refill so maybe from 2/23-2/25 avalanche cycle). One of the East Chutes on Park Cone had a reasonably fresh crown that propagated across most of its start zone (Park Cone is outside the CBAC forecast area but is similar to the shallower snowpack in the Southeast Mountains forecast area).
Weather: Partly cloudy skies with blowing snow were observed at upper elevations. East through south aspects appeared to receive the brunt of wind-loading.
Snowpack: 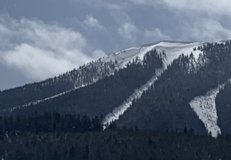 A broadly propagating avalanche in an east chute on Park Cone. There was some refill on the bed surface so hard to nail down the timing.

Additional comments: Included in database as Park Cone is similar to the shallower snowpack in the Southeast Mountains. Size could have been creeping up on D3.