Avalanches: Found one D2 avalanche, likely ran Jan 10th, steep west facing slope associated with rock band.
Weather: Calm winds. Overcast sky. Green housing and warm temperature warming the snow surface.
Snowpack: Skiing in areas that on a normal winter don’t have enough snow to ski, are sweet, but may hold the most concerning snowpack at the moment. Lower cement creek had an HS in the 120 to 150cm range on westerly aspects. About 10cm of 3mm striated facets were F+ hard at the base of the snowpack. Above these large grained facets were another 20cm of 1-2mm faceted grains, with our January storm stacked on top. This concerning snowpack structure gave pause, due to the depth of the weak layer falling into the human triggered realm and overall just weak appearance. As you rolled into more southwesterly aspects the HS decreased and the snowpack transitioned with a potentially collapsable crust with 3mm facets below.

No collapses or obvious signs of instability felt while traveling in this terrain. Snowpack structure showed what is possible, lack of signs to instability showed the stubborn nature of the problem.

3mm striated grains F+ hard with a slab on top. Part of this slope had avalanched and cleaned out the weak layer while much of it hadn’t and the weak layer was preserved. 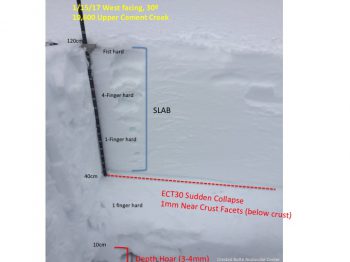 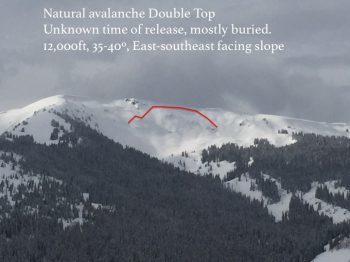