Zone: Northwest Mountains
Route Description: With a weather pattern change expected next week, we traversed through the Ruby Range covering a lot of aspects and basins to map out the current snow surface, which could become a major persistent weak layer for the season.

Observed avalanche activity: Yes
Avalanches: A few very thin wind slabs on SE aspects of Oh-Be-Joyful Peak that might have run during Tuesday night’s increased winds, D1 in size.
Weather: Unbelievably warm. Light westerly winds.
Snowpack: See the sketch below which generalizes surface conditions. The biggest takeaway is that there will be significant differences in stability depending on aspect if next week’s storms deliver us a slab. The northern third of the compass is by far holding the weakest snow, both at the surface and throughout. It is especially weak in shallower areas, wind sheltered areas, and/or at lower elevations. I spent a lot of time looking at east aspects: there are some dramatic transitions in surface conditions that happen over only a small change in compass direction (see photo below). Over the span of ~20° or 30° near due east, the surface changes from dry to thin crust to a crust that is 6″ thick or so. In general, the snow on easterly aspects isn’t as weak as I’m used to seeing during dry spells of similar length in years past, due to the unusually warm temps. I didn’t travel much on westerly slopes, but expect similarities there. Southeast to southwest aspects have melt grains going deep into or throughout the entire pack where snow exists. The surface hoar from Sunday night’s event has been mostly destroyed by wind and sun.
These observations pertain strictly to slopes steep enough to avalanche; lower angled slopes have notable differences in surface characteristics and coverage. Furthermore, terrain features shaded by pine trees have colder, drier snowpacks than what I’ve generalized for open slopes. 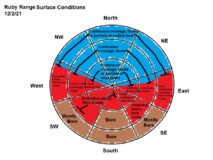 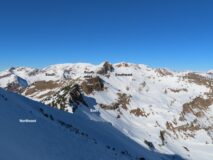 Looking north along the Ruby Range. Aspects are annotated. 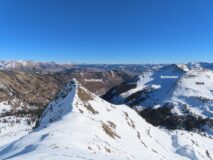 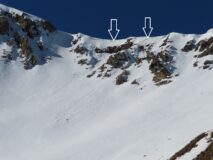 A couple of small, fresh-looking windslabs. 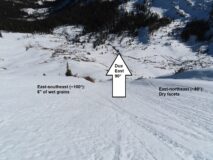 Dramatic transition of surface conditions near due east.