Observed avalanche activity: Yes
Avalanches: I was hunting for signs that one of the dozens of bed surfaces on Schuylkill Ridge is reactivating. I stomped on and ski cut a handful of slopes that ran during the 2/23 cycle without anything interesting until I put in a ski cut above the ENE side of Birthday Bowl, which produced a D2 slab avalanche about 5 feet in front of my skis..maybe we can call that remotely triggered. The slab was about 100 feet wide, 20″ thick, and ran a few hundred feet shy of the bench. The snow structure there was soft snow from the recent storm over the bed surface from the last cycle, which is a soft melt-freeze crust capping facets. From where I triggered it, the slide failed on the facets.  However, as I traced the length of the crown, at some point it stepped up above the crust. So it failed on a combination of old snow and storm interface. I also spotted a small slab that failed midway down the Shield in Redwell Basin, breaking in the storm snow.
Weather: Light winds and very light snowfall this morning. Around 2 p.m., there was a stronger but brief pulse of moderate snowfall, followed by winds increasing out of the northwest. Snow was actively cross-drifting at lower elevations from down-valley winds, and I saw efficient transportation into Red Lady Bowl as I was leaving the trailhead.
Snowpack: 12″ to 18″ of storm snow. No obvious signs of instability underfoot while traveling on an established skin track and while occasionally jumping off the skin track fishing for collapses. I got some localized cracking in drifted features isolated to ridgetop and in a cross-drifted gulley near valley bottom.
On a due east aspect NTL where the entire persistent slab structure is intact, I got hard propagating results about 3 feet down. On due east aspects, the 3/5 crust was about 5 cm thick and 1F hard on steep slopes (see profile). On slopes that avalanched during the last cycle, tests produced failures below the storm snow that did not propagate on the weak facets left behind after the avalanches. The slope that avalanched had a similar structure as the latter ones I tested with ECTs.
On SE aspects, that same crust is very thick and supportive. The storm snow appeared to be bonding fairly well to that crust on southerly aspects; ski cuts on slopes up to 40 degrees only produced minor sluffing in the top few inches of snow. 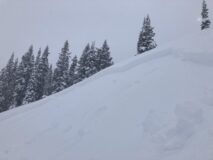 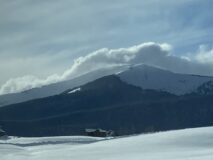 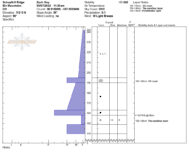 Snow profile. East aspect NTL on a slope that did not avalanche last cycle. 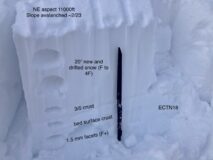 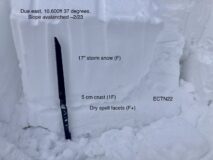 A due east facing slope below treeline that avalanched around 2/23. The old bed surface still contains weak faceted snow below a 5 cm thick crust.