Weather: Overcast skies with light winds at valley bottom. Little to no snowfall from 1230 – 330. New snow accumulations of 5″ at 11,400′ @ 300pm. New snow was largely small graupel and rimed precip particles. A minimal amount of drifting at ridge top near treeline at this location. Had reasonable views of greater Anthracite Range in the afternoon with some wind transport visible above treeline but less than expected. Winds were from the west. Leaving Kebler Pass around 330 snowfall started again and winds began to pick up. 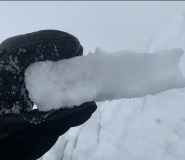